A bit of care, and everyone wins

They’re out: snakes, we mean.

Which means: look out. It’s important to be careful when in areas likely to be frequented by snakes, for obvious reasons. This is virtually an annual preoccupation, so, at the risk of repeating ourselves, we are now going to repeat ourselves. 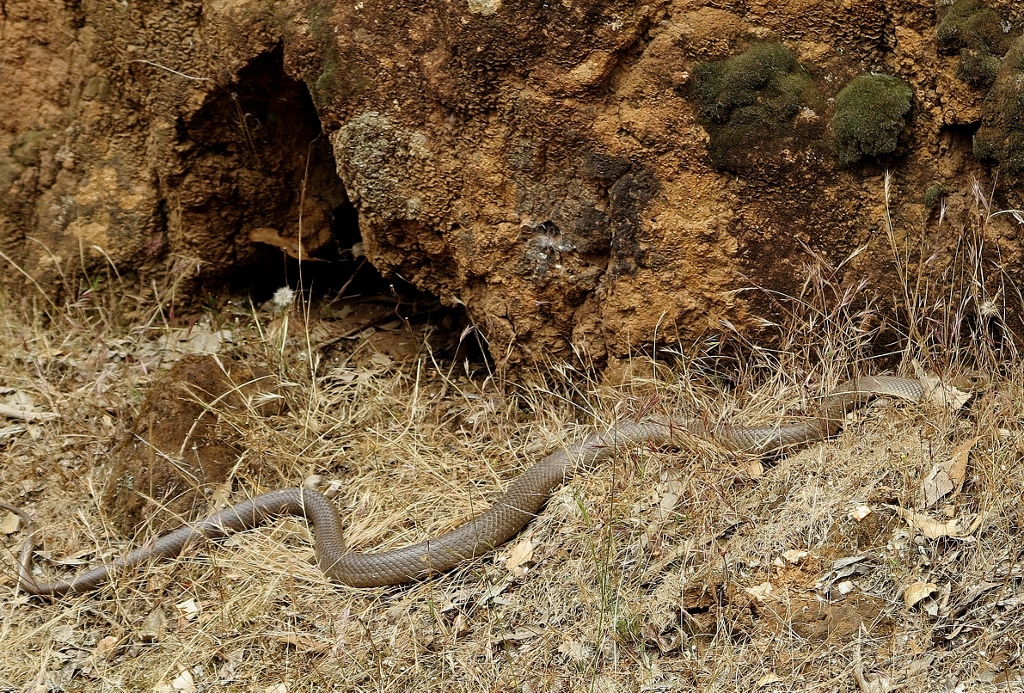 Eastern Brown snake, Gough’s Range SF, November 12 2020: we need to be careful about snakes: but the brute fact is that they are more at risk from us than the other way around.

‘The Eastern Brown is highly venomous—but it’s not keen on attacking anyone as big as a human, and … will always try to get away if it can. If cornered however, it is extremely nervous and aggressive. The moral therefore is, don’t approach any snake, and dress appropriately if going into areas where one might be met. The great  majority of snake bite deaths have arisen when people unwisely take on the reptile [if you want to get it away from the house, call a snake catcher]. It is, of course, illegal to kill snakes, which are protected animals. For pets, the best advice is, don’t let them roam around the bush ferreting into holes; in any case, dogs should be on a leash in the Diggings Park.

Common sense is the best defence against snake bite, but unfortunately hysteria is more common than common sense, as witness a 2013 Sydney Telegraph headline: ‘Snakes are raiding the suburbs…Fatal snake bites will become a tragedy repeated this summer as the deadly reptiles—thriving in hot conditions—slither towards the urban sprawl.’ This horror movie scenario doesn’t fit well with the fact that on average less than 3 people per year over the whole of Australia die from snake bite: far more people are killed by bee stings…

…And the odds are stacked against the snake: more than five million reptiles are killed by cars in Australia every year. According to the Australian Museum, ‘countless’ Brown snakes perish in this way, ‘both accidentally and on purpose’.

For other FOBIF material on the subject, try here and here.