Another day on the highway

The photo below is of a red bellied black snake on the Pyrenees highway at Barkers Creek in late December. Efforts to persuade the snake to move off the road in one direction or another proved futile, and the reptile was killed by passing traffic not long after this photo was taken. As we’ve reported in previous posts, reptile deaths on our roads are quite horrific, and in many cases avoidable. 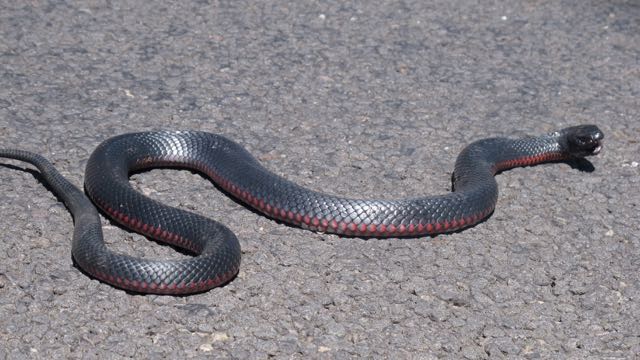 The red bellied black snake is venomous, but not as aggressive as browns and tigers can be when cornered. As the Australian Museum puts it:

‘This beautiful serpent shares our love of sunshine and water, and is a familiar sight to many outdoor adventurers in eastern Australia. Attitudes towards these largely inoffensive snakes are slowly changing, however they are still often seen as a dangerous menace and unjustly persecuted.’

It’s worth reading the Museum’s highly diverting account of this reptile’s mating rituals. The males engage in spectacular wrestling matches which can resemble mating. In their very useful guide Frogs and reptiles of the Bendigo district, Darren Green and Dale Gibbons relate the story of naturalist David Fleay, who caught and bagged two fighting snakes, ‘whereby they resumed their brawling inside the bag slung over his shoulder!’

The combats are not fatal, however: the loser wanders off to another area, presumably to try his luck elsewhere.

The photo below encapsulates the hard reality of summer, reptiles and roads:

The same snake a short while later: at least five million reptiles and frogs are killed on our roads each year.

1 Response to Another day on the highway