Representatives of several conservation groups, including FOBIF, have done a couple of reconnaissance trips along the Pyrenees Highway to look over trees marked for the chop as part of Vicroads proposed Safe Road Project.

FOBIF will be making a submission on the proposals by the due date of Friday April 8. Submissions should be sent to Vicroads at 53-61 Lansell St Bendigo or by email to nrmailbox@vicroads.vic.gov.au 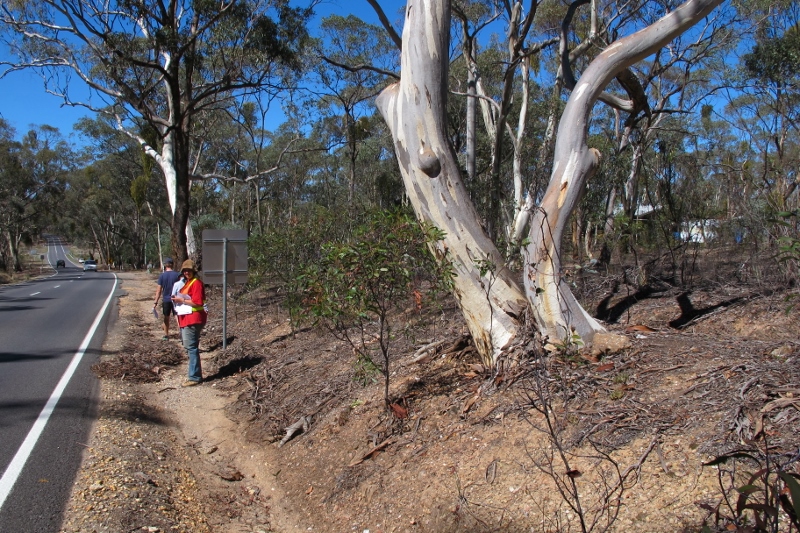 FOBIF is puzzled that some trees high on embankments, like this Yellow Gum, are marked for removal. We are also interested in the fact that highway edge vibration strips are not included in the project.

Initial impressions from the group include the realisation that a tree classified ‘medium’ [that is, with a trunk diameter between 52 and 70 cm at breast height] might be medium by the standards of, say, a Gippsland forest, but in this region that could be significantly larger than average.

We are also puzzled that highway edge vibration strips are not listed as among the works; and that only limited improvements to the road shoulder are planned: the road for significant stretches has little or no shoulder and falls quickly away to eroded gutters.

It seems that the strips were considered in the early stages of this project, but left out for budgetary reasons. There is substantial evidence that they reduce runoff road accidents. One US report offers the following: ‘According to National Highway Cooperative Research Program (NCHRP) studies, milled shoulder and edge rumble strips reduce single-vehicle run-off-road injury crashes by as much as 24 percent on rural freeways and by as much as 46 percent on two-lane rural roads.’ If this research matches Australian experience, it would seem strange to leave the strips out of this project, whose main object is to reduce such crashes.

We’ll be looking to clarify these and some other questions before making our submission. We also want to clarify the matter of distances between roadside barriers and adjacent trees; and we’re curious that a number of trees high on embankments have been marked for removal.

As a footnote: in the time it spent examining the roadside, the group witnessed a couple of scary examples of driver irresponsibility: passing at excessive speeds on sections with limited visibility. It’s clear that the margin for error on a road like this, with a narrow verge and steep drop offs is small: and that traffic calming should be a priority. We don’t envy Vicroads in the challenges it faces on this one. Our society continually plays the contradictory game, where we are told that speed kills–and yet high speed, powerful vehicles are put in the hands of anyone with the money, and events like the Formula 1 Grand Prix [not to mention numerous TV programs] glamorise speed and power.