The Federal Department of the Environment estimates that estimated that weeds ‘cost Australian farmers around $1.5 billion a year in weed control activities and a further $2.5 billion a year in lost agricultural production. The real cost of weeds to the environment is difficult to calculate, however it is expected that the cost would be similar to, if not greater than, that estimated for agricultural industries.’ 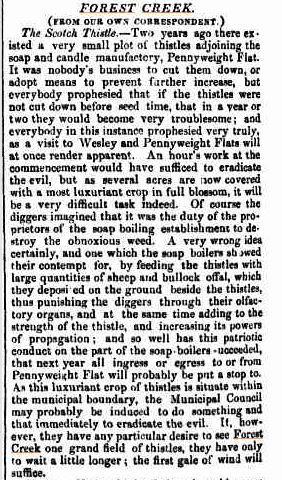 John Ellis has unearthed the item at left from the Mount Alexander Mail, December 1857. The thistle was declared as a noxious weed in Victoria in 1856. Apparently the Mail‘s urgings weren’t heeded, because it’s now Victoria’s most widespread weed ,  and covers over a million hectares around Australia. Before you get depressed by that figure, it’s worth noting that this is only a fifth of the area it covered before control programs started in the 1960s. Weeds can be fought!

There’s an interesting moral in the Mail‘s sermon, too: get in early, before the problem gets out of hand. If only we’d done that with bridal creeper, for example: a few years ago its spread was a fraction of what it is now. That’s more motivation for those attacking outbreaks of Chilean Needlegrass.