FOBIF has made a submission to the inquiry by the Inspector General for Emergency Management [IGEM] into the 2019-20 Victorian fire season. The inquiry is broad, ranging over topics like education, operational responses, evacuation planning, the use of the Australian Defence Forces, and many others. Our brief submission focused on two of terms of reference: resourcing of land management, and the biodiversity implications of fuel reduction. The substance of the submission is below:

We wish to offer a brief submission to the enquiry under two categories:

1 In the context of bushfire preparedness, assess the readiness and responsibilities of statutory agencies, Local Government and State Government bodies.

In our view land management in Victoria is seriously underfunded. A quick check of the budgets of Parks Victoria over the last ten years, for example, will show an effective decline in funding, even though the responsibilities of Parks staff are wider—there are a nearly a million more people in the state than there were ten years ago.

One of the consequences of this funding inadequacy is that fuel reduction exercises tend to be crude and unnecessarily damaging. We note the following, from the Carter enquiry into the disastrous Cobaw fire of 2015, a reduction burn escape:

‘Interviews [with DELWP staff] also revealed that there is a resignation by staff that district resources and budgets are tight and this may result in resources at a burn being “thin”. The Investigation Team noted that many of the staff interviewed commented that the resourcing for the  Lancefield-­‐Cobaw  burn  was not optimal however “we do what we can with what we have” or “we are just used to managing with what we have”.’

We have heard this story from fire managers many times. For example, we have yet to see a fuel reduction burn which does not unintentionally destroy large trees [contrary to Department policy]: this is because managers don’t have the person power to survey the zone in question and institute measures to protect such valuable assets.

We urge IGEM to strongly recommend adequate resourcing to both DELWP and Parks Victoria.

2 Review … all opportunities and approaches to bushfire preparedness, including different methods of fuel and land management (for example ‘cool burning’, mechanical slashing, integrated forest management, traditional fire approaches) to protect life and property as well as ecological and cultural values.

All of the above approaches have their merits. Our concern is that in recent years, especially during the time of the five per cent burning target, most fuel reduction efforts have been directed at ‘cool burning’ . 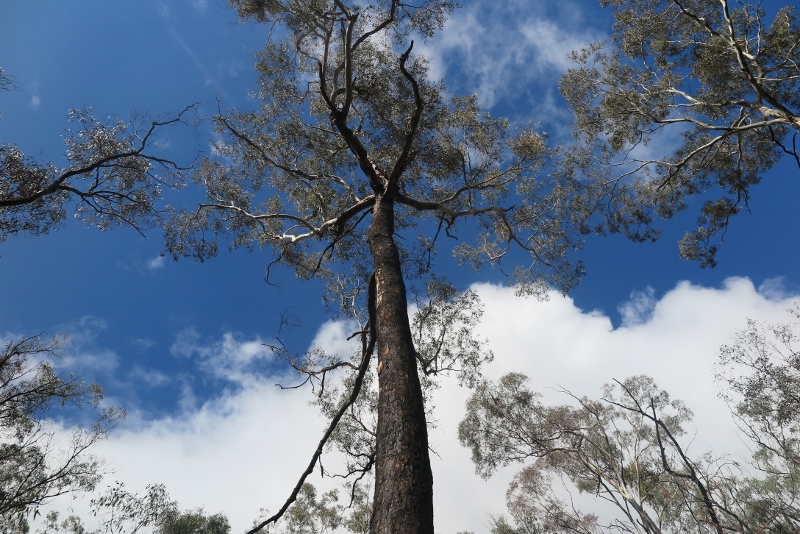 This is the tree pictured above. It’s almost certain to fall. The biodiversity implications of reduction burns are largely unknown. Although managers are increasingly aware of this, a disturbing number are overconfident that the bush ‘always comes back.’

All too often ‘cool burns’ have been very hot, with resultant dense regrowth of flammable bush]. Fuel in such cases has not in fact been reduced. We could point out many cases where one side of a track, recently burned, is dense with wattle and eucalypt regrowth; while the other, unburned, is open grassy woodland.

We urge that where fuel reduction burns take place, they should be done in small area lots, allowing careful assessment of both fuel loads and environmental values. Too often in the past the Department has drawn lines on a map and lit a fire without too much concern about the biodiversity impacts of the exercise. The result is suggested in the 2019 State of the Environment report:

We realise that reduction burns in small patches could be an expensive exercise. Our question is, how valuable is public safety and the environment we live in?