On the subject of old trees, and the lack of them, it’s worth drawing attention to a recent article in the Conversation website on their value:

‘In urban landscapes, many consider large and old eucalypts a dangerous nuisance that drop limbs, crack footpaths and occupy space that could be used for housing. But when we remove these trees they are effectively lost forever. It takes at least 100-200 years before a eucalypt reaches ecological maturity.

‘As trees mature, their branches become large and begin to grow horizontally rather than vertically, which is more attractive to many birds as perches and platforms where they can construct a nest. 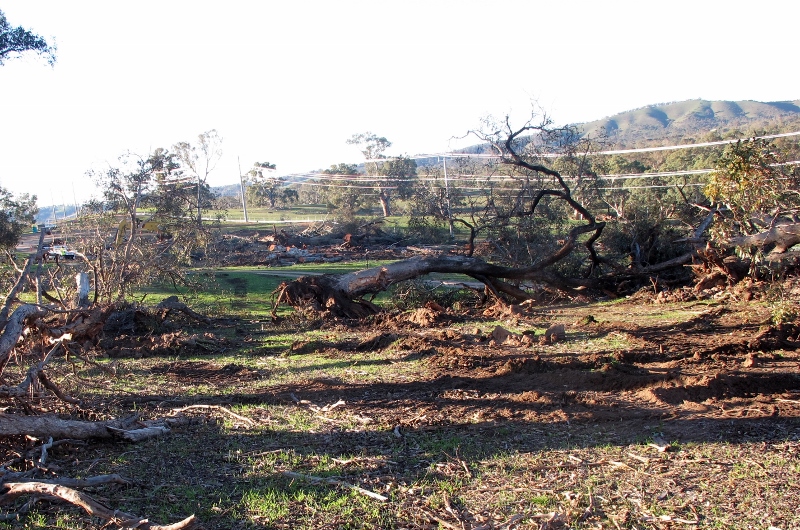 Ravenswood interchange, May 2016. ‘The number of native birds in an urban park or open space declines by half with the loss of every five mature eucalypts.’ 1800 such trees were destroyed in this exercise. Is there a better way of getting safety?

‘Wildlife also use cavities inside ageing eucalypts. These are formed as the heartwood – the dead wood in the centre – decays. When a limb breaks it exposes cavities where the heartwood once occurred.

‘This is such a ubiquitous process in our forests that around 300 of Australia’s vertebrate species, such as possums, owls, ducks, parrots and bats, have evolved to use these cavities as exclusive places to roost or nest.

‘Mature trees also support high concentrations of food for animals that feed on nectar, such as honeyeaters, or seed, such as parrots.

‘One study found that the number of native birds in an urban park or open space declines by half with the loss of every five mature eucalypts.’

This last point is a sobering one—given, for example, that Vicroads demolished 1800 mature redgums at the Ravenswood interchange, and are looking to knock over another 3000 on the Western Highway. Of course, the reason offered was safety: but the question never seriously faced is: can safety be achieved without unnecessary destruction of the environment?