In the meantime, what’s happening in the Parks themselves? We do have great parks, but this Report, though it does have some useful info, won’t give you a real idea of the serious challenges the park system faces.

The Report papers over so many cracks that, like any rose tinted view of things, it quickly loses credibility. It blandly suggests on page 18, for example, that the feral horse and deer problems are under control in the Alps: this is a depressing evasion of the real facts. On page 17 we are told that major research projects on biodiversity in Box Ironbark regions have been ‘incorporat[ed] into bushfire planning.’ To say the least, this is premature. 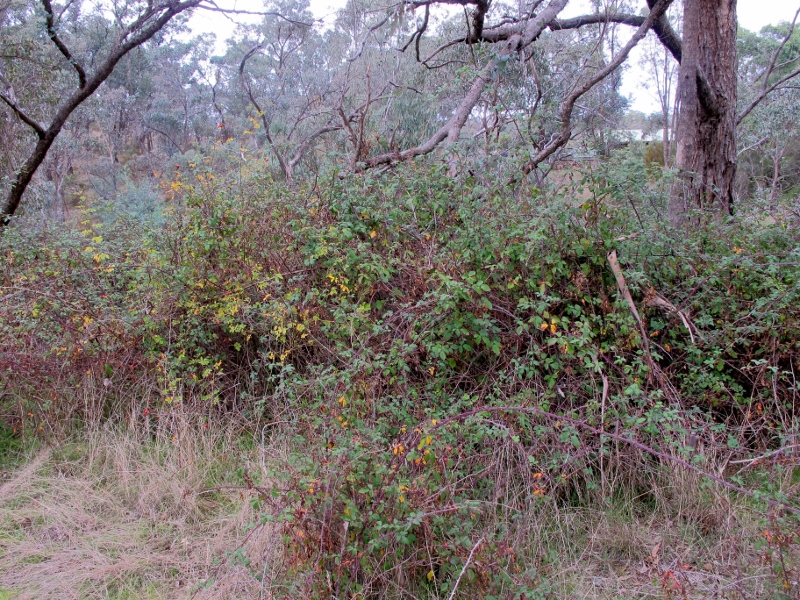 Blackberry and briar rose, Cobblers Gully: the PV Annual Report claims that 40% of Parks’ area was ‘treated’ in one year.

Further, there are claims that are counter intuitive to the reader. On page 48 we read that the ‘Number of hectares treated to minimise the impact of pest plants, pest animals, and overabundant native animals and plants (including meeting ecological fire and watering objectives)’ is 1,683,824. This is over 40% of the land administered by PV–in one year! A lot depends on what you mean by ‘treated’–but would anyone claim that 40% of our parks are significantly weed free? Park Victoria rangers do a valiant job, but it’s hard to imagine they’d claim to be so on top of the weed and pest animal problem.

All the same, if you can skip the corporate speak, and maintain a reasonably sceptical perspective on the claims for a near perfect performance, the Report does give you an idea of the range of Parks Victoria’s activities. It’s a pity such documents veer so wildly towards propaganda that even their legitimate claims look dodgy.

We’ll have a look at a few more aspects of this report in future posts.