Not that you’d know about pressure and stress by reading the Parks Victoria Report. As is the nature of these documents, it’s nicely illustrated, and full of good news. It might be unfair to call the general tone gaga, but not very unfair. Here’s the introduction, by Chairman of Parks Victoria Board, Andrew Fairley: 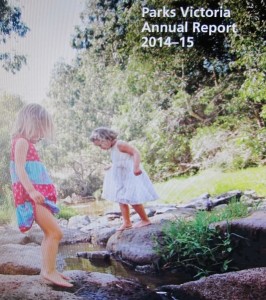 PV Annual Report: ‘our throat has been cut, and we’re feeling just fine.’

‘At Parks Victoria, we believe the future is one of excellence, so we have changed how we operated during 2014–15 to significantly improve the way we deliver our services. … The deployment of a new operating model and a new structure in our regions, complemented by realignment across our Corporate Services divisions, has brought considerable transformation to our business…The Parks Victoria Board is extremely excited by these changes…’ Page 8

Get it? What it means  is, ‘Government funding dropped from $96 million to $76 million last year, and we’re doing great!’

A more sober version of the same thing is contained in the financial part of the Report , which nevertheless manages to say that PV ‘achieved’ a deficit of $6 million:

It’s pretty clear from this report that budget cuts are only one problem for Parks. Just as important is the corporate speak that dresses up savage budget cuts as ‘improvements’.

2 Responses to Parks Vic 2: ‘God’s in His heaven and all’s well’