How do they do it? [1] Making something out of nothing

It’s been a bleak period in our bushlands this year, but even in the bleakest of times, something surprising can be seen: and, as during the millenium drought, one of the most surprising is the sight of this delicate looking plant, growing in the most unpromising, dried out locations: bare, hardened tracks, crackling, apparently soil free ground–almost anywhere where life looks to be a struggle. It’s the Magenta Storksbill. 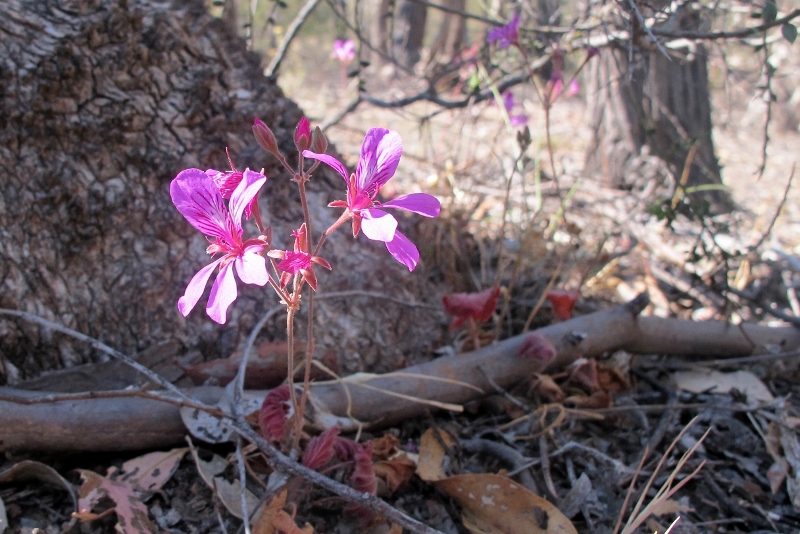 Magenta Storksbill [Pelargonium rodneyanum], Kalimna Park, December 4: it flowers valiantly when other plants are hunkered down.

Pelargonium rodneyanum makes its first appearance in Western documentation in volume 2 of Mitchell’s journals of his expedition into south eastern Australia. He seems to have noticed it first in the Swan Hill region. His journal entry for June 21 1836 reads:

‘We also discovered a beautiful new species of the Cape genus Pelargonium, which would be an acquisition to our gardens. I named it P. rodneyanum* in honour of Mrs. Riddell at Sydney, grand-daughter of the famous Rodney.’

The ‘famous Rodney’ was apparently Admiral George Rodney, notable for his sometimes controversial exploits in wars against the French and the Americans–and for some pretty dodgy efforts at accumulating wealth for himself. A good name for such a plant? You decide.

The sample Mitchell collected was sent to England, and the plant received its first description in modern scientific terminology from the famous botanist John Lindley. The description, which appeared for the first time as a footnote in Mitchell’s published journal in 1838, was in Latin. How modern is that?