How do they do it? [2] Surviving in the pollution soup

The picture below is a Common Long Neck turtle [Chelodina longicolis] sun baking in the horrible pollution soup that is Forest Creek at the Wheeler Street bridge. Turtles have been seen in this unpromising location for many years, and seemed even to have survived the millenium drought, when there was little or no water under the bridge. 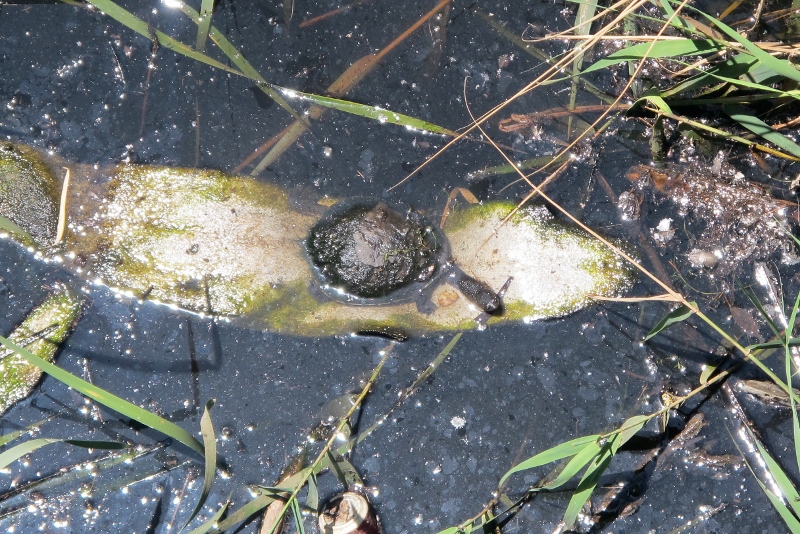 Common long neck turtle in Forest creek: it’s not the most pristine environments, but the species has hung on in this location for years.

The scum covering the turtle’s back doesn’t suggest that the creature is terribly healthy, but when disturbed, it moved with tremendous speed to take shelter in the reeds.

Interesting turtle facts: the Common Long Neck [aka ‘snake neck turtle’ and ‘stinker’] can survive long dry periods by digging into soil and aestivating. According to the Bendigo Field Naturalists excellent guide Frogs and reptiles of the Bendigo district, ‘turtles communicate with each other via a wide range of vocalisations that have a lower pitch than humans can hear.’ When threatened, the turtle lets out an offensive odour [hence the unromantic name, ‘stinker’]. This turtle can live for 50 years, so maybe the sightings regularly made in this unpromising location over the last 20 odd years have been the same one.

This creature can wander significant distances in search of viable habitat. And guess what? After habitat depletion, the biggest threat to its survival is that of being run over by a car.