Look again: there’s something there

Those interested in getting a better look at relatively obscure elements of our bushlands should get along to the Nature Abstracted exhibition at the Falkner Gallery in Templeton Street Castlemaine.

The exhibition of photographs by Bronwyn Silver concentrates on lichens, with a few quite spectacular moss photographs as well. Bronwyn was a major contributor to the FOBIF Guide to mosses in south eastern Australia. 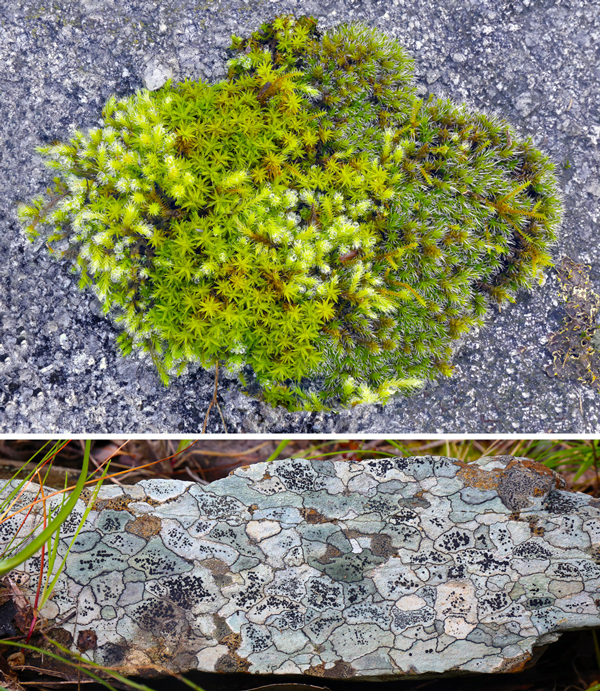 Moss and lichen photos from the ‘Nature abstracted’ exhibition. The moss species are clearly identifiable, and the lichen photos are spectacularly evocative ‘landscape maps’.

To get an idea of what’s on offer, we can’t go past the artist’s own statement:

‘There are over 3000 known species of lichen in Australia; some are leafy, some are plant-like and some are flat. In this exhibition I have focussed on one of the flat types, Rhizcarpon geographicum, commonly known as map lichen.

‘This species is tightly encrusted to rock surfaces, comes in many colours and often has intricate abstract arrangements due to each lichen being surrounded by a black border and adjacent to another. Many of the rock surfaces covered with Rhizcarpon geographicum look like aerial maps.

‘Unless you watching out for this lichen, these subtle and often small formations can be easily overlooked. Once I became aware of its wonderful abstract qualities and sought it out, I found it to be quite common. It became an absorbing pastime to find and photograph the variety of its rock face displays.

‘Lichens are sometimes confused with moss but they are unrelated to moss or any other plant.  They represent one of the most remarkable alliances in nature: one species of alga or cyanobacteria or both and one species of fungus grow together in a mutually beneficial relationship known as symbiosis. These mysterious composite organisms can grow in widely diverse habitats and fossil lichens have been recorded back to the Mesozoic era (135-225 million years ago). They have been shown to remain largely unaffected when exposed to outer space.

‘Lichens can help with soil stabilization and the colonisation of barren environments.  Some animals eat them, insects shelter in them and people have used them for dyes, perfume, medicine and food. They form part of our aesthetic appreciation of the bush with their vivid colours, unusual shapes and wonderful patterns on the surfaces of rocks, trees, leaves and soil.

‘As well as lichens, I have included some photos of moss and eucalyptus leaves.  Despite these not having the strong abstract content of the map lichen photos, they share some of the same features. All are detailed images demonstrating the stunning beauty of our bushlands when viewed at close range. Moss species in each photo can be identified on request.’

The exhibition runs till June 21st.