Our friends the blackberries?

Walkers along the Moonlight Creek edge of Kalimna Park in the last week have been puzzled by the fact that DELWP seems to have gone to a lot of trouble to protect a mountain of blackberries from its recent management burn. This involved carving a fire break around the area, about 50 metres long, and grooming surrounding areas of vegetation.

The mountain of blackberries is more than it seems, however: it conceals–or mostly conceals–a nineteenth century ruin, with adjacent orchard. Looked at with that in mind, it’s quite an evocative sight. 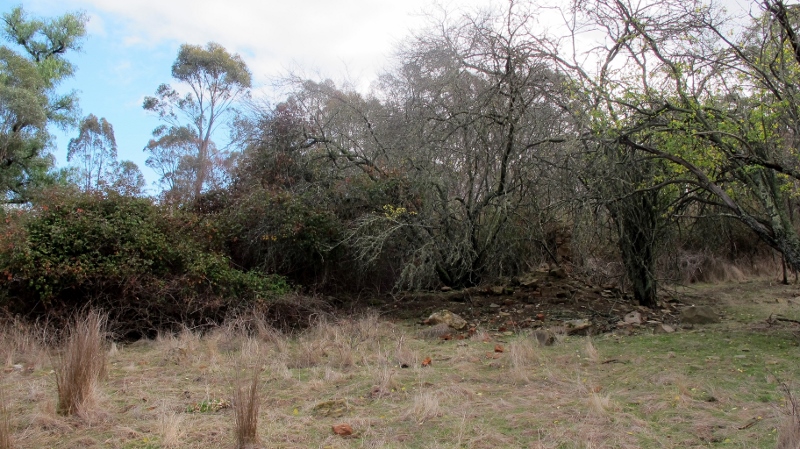 You could walk past it and see only blackberries, but it’s actually a historic site, probably dating from the 1870s. The wall of the ruin is to the right.

FOBIF had assumed that after the fire exercise had been finished, Parks Victoria would go back and remove the blackberries from the ruin. This is not the case: it’s a depressing fact that the weed is being left there, because it is seen as a deterrent to vandals who might be inclined to come and steal stone from the building.

This isn’t great news, given that there’s a big infestation of blackberry in nearby Moonlight Creek, and this particular weed has expanded its range dramatically since the breaking of the drought. But there’s logic in the managers’ position. Vandalism, in the form of graffiti on historic sites, and removal of relics and building materials, is an international problem. And, believe it or not, weeds have some kind of a record in protecting historic sites: as an example, an Aboriginal stone arrangement in the Western District was protected for many years by an infestation of thistles!