As of today, Parks Victoria has started on a program of grooming vegetation in Kalimna Park along the town edge and Moonlight Creek. The program aims at eliminating mainly exotic weeds as a fire protection measure [creating a roughly 50 metre wide border along the town edge], and removing blackberries and other weeds along the creek . 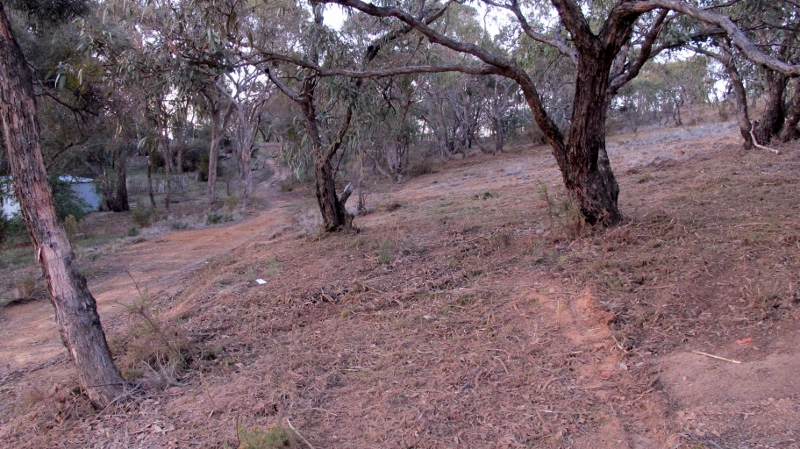 Groomed area near Bull Street: the removal of vegetation is part of a package of fire management actions.

Parks also intends to conduct a fuel reduction burn on Kalimna Point, but we’re not sure when or how this will be done. The Point is a problematic area: to quote from the website of the Friends of the park: ‘Kalimna Point is close to the town and from the early days was a destination for residents to visit as it allowed good views of the district. Between 1903 and the late 1920s the community planted a mix of European and Australian trees around the point and set up benches, a rotunda and a direction finder. Remnants of these avenue plantings and paths still exist.’

The views referred to are now blocked by Sugar Gums and other exotic planted trees. The Point is a bit of a sad relic of its former glory but is not without its charms, a colony of Eltham Copper Butterfly being one: and it’s still very popular with walkers. The Friends group has recently embarked on work on the Rotunda, and there’s definitely potential—with sensitive management—for a site of great recreational and botanical value there. See http://www.kalimnapark.org.au/friends-of-kalimna-park-castlemaine/