Fire review: it’s time to accept the obvious and the logical

Submissions to this review will be received up to 5 pm on Friday March 13. They can be sent to

FOBIF has made a submission, the main part of which is reprinted below:

For some years we have argued that a fixed target is not a sensible approach to fire protection, that it would be damaging to biodiversity, would distract attention and resources from public safety measures, and that it would soon become an end in itself, separate from anything to do with actual bushfire risk.

From the beginning we were perplexed by the Royal Commission’s recommendation for  a fixed target of fuel reduction, arguing, with many other bodies, that it seemed to be quite detached from any precise strategy of community protection, and that it seemed to contradict the idea espoused by the Commission that local knowledge should be valued , and not straitjacketed into a preordained set of priorities.

The Commission did, however, in recommendations 57 and 58, imply that the target could be altered if monitoring of its effects showed that would improve public safety, or biodiversity, or both. Why else have a monitoring system, if you don’t think it’s going to improve your practice where necessary?

It’s clear from the reports of the Bushfire Royal Commission Implementation Monitor over the years that the BRCIM took this view, as he has twice made recommendations that the government’s efforts be ‘strategically focused on addressing high bushfire risk areas rather than on meeting the annual rolling target of five per cent minimum of public land as the primary focus.’

It’s also clear that, at some level at least, the former state Environment Minister had a similar idea, as the BRCIM noted in his 2013 report:

‘The BRCIM notes that in May 2013, the Minister for Environment and Climate Change stated in the Public Accounts and Estimates Committee:

‘“We are also doing a lot of work around developing a risk based strategic approach to fuel management on public land. We want to have a program that is based on the risk to human life and critical assets. We want to have an approach that helps us make evidenced-based decisions around bushfire management and also allows us to assess the work we have done and make sure that we have the policy objective of reducing the risk of bushfires while having an eye on property and critical infrastructure and certainly on ecosystems.” p 63

The Monitor accepted that all these measures are ‘part of a process for transitioning from a purely area based target approach.’ Yet in spite of the fact that much work was done developing Strategic Bushfire Risk Management Plans, the Coalition Government persisted in a target policy.

At a briefing in Creswick on October 10 last year the contradiction between a target policy and a risk management policy was clearly tabled. As we reported at the time:

‘The conservationist [and scientific] view is: first you do an assessment of the bushfire risk, then you respond to that risk in appropriate ways: that is, by educating people about the dangers, controlling development in dangerous areas, building rapid attack firefighting capacity, developing a refuge strategy, and carefully calculating fuel reduction programs…

‘The Government view is that you decide in advance how much land you burn, then you work on the risks: you try to burn smarter, and you do a lot of monitoring, but none of this influences the amount of burning you do.

‘In other words, even if the risk analysis and the monitoring program demonstrate conclusively that the burning program is not making people safer, but is doing a lot of environmental damage, you keep on with it.

‘A fixed burning target is clearly not compatible with serious risk management: this point has been made clear by the Royal Commission Implementation Monitor and many others.’

This remains our view. We trust the IGEM will give it serious consideration.

For the FOBIF committee

We add here part of our brief review of the West Central Bushfire Risk Landscape document launched in Creswick on October 10. We do this because we believe that although fuel management is an issue, it should not swamp concern over other matters:

This document has been anticipated with some interest—as have its companions, the plans for the East Central and Barwon Otways districts. It was launched at last Friday’s Creswick conference by Lee Miezis, DEPI’s Executive Director, fire and emergency management– with some suggestion that it promised a new improved approach to fire management.

The promise is still there: there’s no doubt that careful risk assessments and computer modelling of bushfire behaviour could enormously improve our capacity to deal with bushfires. This document disappoints in the delivery, however.

Its first problem is that it largely confines its consideration of risk to the matter of fuel and fuel management. On page 31 of a 33 page document we’re told that fuel management is ‘only one of a range of approaches to reduce bushfire risk on public land.’ The others include prevention, preparation, response and recovery.

You’d think the first of these [‘prevention, to minimise the occurrence of bushfires, particularly those started by people’] would be a high priority, given that most fires are started by people [in the Mount Alexander shire there are an average of 53 fires a year, and only 6 of these are naturally occurring. 42% of fires dealt with by DEPI since 1972 have been accidents, 35% were deliberate, and 17% ‘unknown or other causes’]. It will be dealt with ‘over the next few years’. In the mean time we have a range of advertising and punitive measures with a limited success record. Priority is given to fuel, and the community is given to understand that its management is the main way to reduce risk.

You’d also think that a major risk is housing in dangerous areas. This is referred to in passing on page16, then forgotten.

The second problem is that in practical terms the plan is perfectly vague. This is partly because a 33 page document dealing with a region which stretches from the outskirts of Geelong to beyond Huntly, and from Melbourne’s western fringe to north west of Dunolly could only deal in the most general way with the problems it’s confronting.

So, if you’re hoping to get an idea from this document as to how stuff is going to happen on the ground, forget it. What we get is some useful info about fire behaviour, with a few vague gestures about fuel management: and remember, whatever the computer modelling and risk assessments say, DEPI has still been directed to burn to its target.

Among the useful info in the document is the  map below, with the mid grey hatched areas showing ‘priority fuel management areas’: 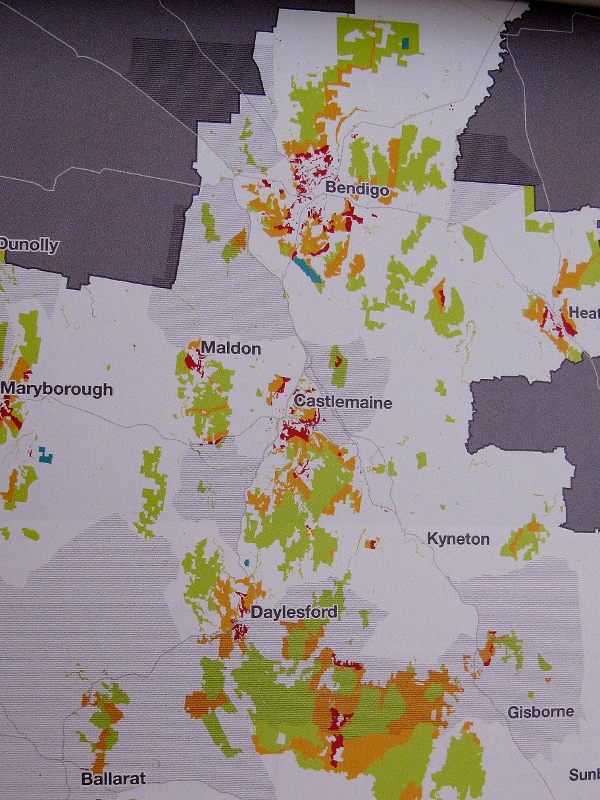 ‘We will ensure that at least 40% of all planned burning each year on public land is in the priority fuel management areas.’

This is quite a baffling comment, given that in our area these areas are overwhelmingly on private land. The text adds, however:

We’re resigned to business as usual—for the immediate future at least.