A conference on bushfire management reform held at Creswick on October 10 served to highlight some of the complexities in fire management, and to underline the difference between Government policy and the views of conservationists.

The difference centres around whether a risk management strategy is compatible with having a fixed target for burning public land.

The conservationist [and scientific] view is: first you do an assessment of the bushfire risk, then you respond to that risk in appropriate ways: that is, by educating people about the dangers, controlling development in dangerous areas, building rapid attack firefighting capacity, developing a refuge strategy, and carefully calculating fuel reduction programs. 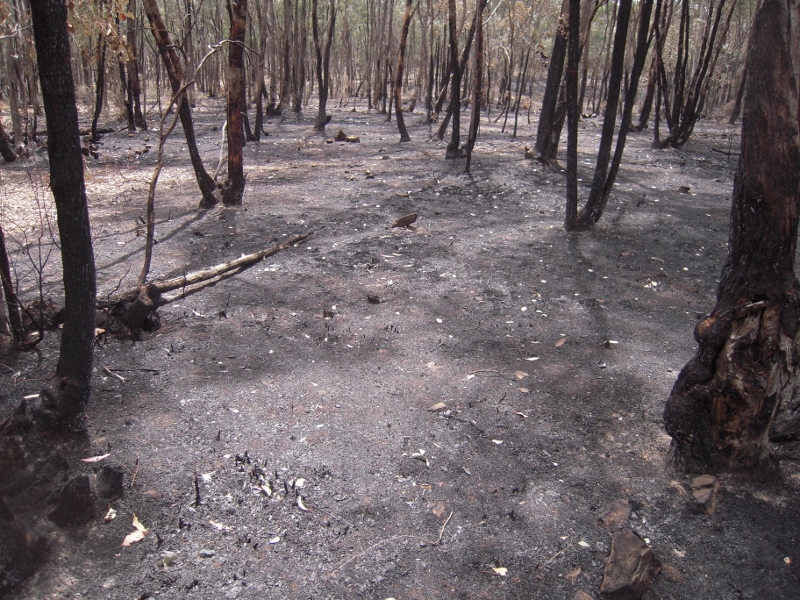 Muckleford Demo track, November 2011: even if risk analysis showed that the burning program wasn’t making us safer, the Government would still be committed to it.

There’s debate about how effective the Government’s effort has been on the first four of these approaches; but on fuel reduction the situation is stark.

The Government view is that you decide in advance how much land you burn, then you work on the risks: you try to burn smarter, and you do a lot of monitoring, but none of this influences the amount of burning you do.

In other words, even if the risk analysis and the monitoring program demonstrate conclusively that the burning program is not making people safer, but is doing a lot of environmental damage, you keep on with it.

A fixed burning target is clearly not compatible with serious risk management: this point has been made clear by the Royal Commission Implementation Monitor and many others. The government, however, is sticking grimly to the policy. The Labor Party appears to be doing the same, perhaps not grimly, but gormlessly.

The above depressing theme tended to overshadow an otherwise informative conference. DEPI went to a lot of trouble to assemble numerous experts to explain and explore ideas on risk modelling, ecological monitoring, and ecological resilience.

It’s clear that a lot of promising work has been done in these areas in recent years—and that an enormous amount remains to be done. For example, although 1,000 monitoring points have been established in the State, no controls have been established for these points: in other words, although monitoring is done at these points before and after burns, there is no way of comparing each point with a similar area which has not been burned at all. There remains a question of the connection between the scientific work and practice on the ground. Although there has been patchy improvement in this area in recent years, there remains the fact that some fire managers aren’t particularly interested in the environmental effects of fire.

And there’s one of the hardest of all problems: for ecologists, deep leaf litter is an important sign of forest health. For fire managers, it’s dangerous fuel. Resolving this problem without destroying whole ecosystems is going to be a challenge.