As we reported above, participants at the January 30 consultation meeting were assured that track works and mineral earth breaks related to burning operations would be carefully managed and would not involve unnecessary gouging or road widening. 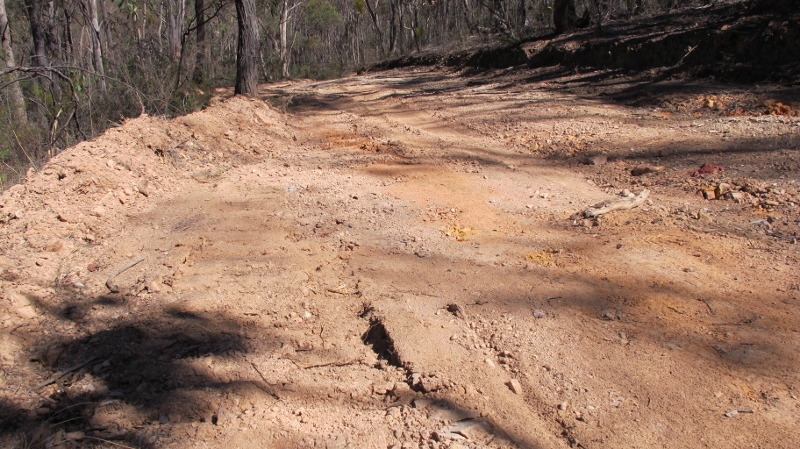 Track ‘upgrade’ in Kalimna. This particular track slopes steeply off the Tourist road, and is now a prime candidate for erosion.

Residents can judge for themselves how well this undertaking was kept. Within a week of the meeting work on several minor tracks leading steeply off the Tourist road were heavily gouged to widths of up to 7 metres, and their surfaces reduced to a powdery dust. These tracks, though by no means highways, were previously perfectly negotiable by appropriate vehicles.

This week, ‘upgrades’ have also been performed on the Lawson Parade end of the Tourist road. The top of this road, which has a parking area, has now been widened from 15 to 20 metres.

Much of this work has been conducted on tracks steeply sloping off the Tourist road, and seems like a pretty good effort at promoting erosion when the first storm comes along.

We’ve had a go at trying to get a sensible approach to tracks before, and have received numerous assurances, both from Parks Victoria and from the Council. We are NOT opposed to appropriate fire access: but the relentless widening of tracks to widths bigger than the Midland Highway not only destroys the picturesqueness of our bushland, it creates all sorts of environmental fragmentation as well.