Some anguish was expressed in the meeting about the inflexibility of the zones. Members will recall that we are concerned at the large Zone 1 area on Mount Tarrengower, and the Zone 2 south of Guildford. The fact is that the consultation run by DSE over zoning was little noticed [see our 2011 reports here and here]: local conservationists managed to have some zones changed in this process, but some were unnoticed. It’s fair to say that the hugely expanded burn program is bringing home to people some of the deficiencies in theory and practice which had been relatively unnoticed until recent years. Although FOBIF participated in the 2011 process, there were sections of the Zone map which escaped our attention. 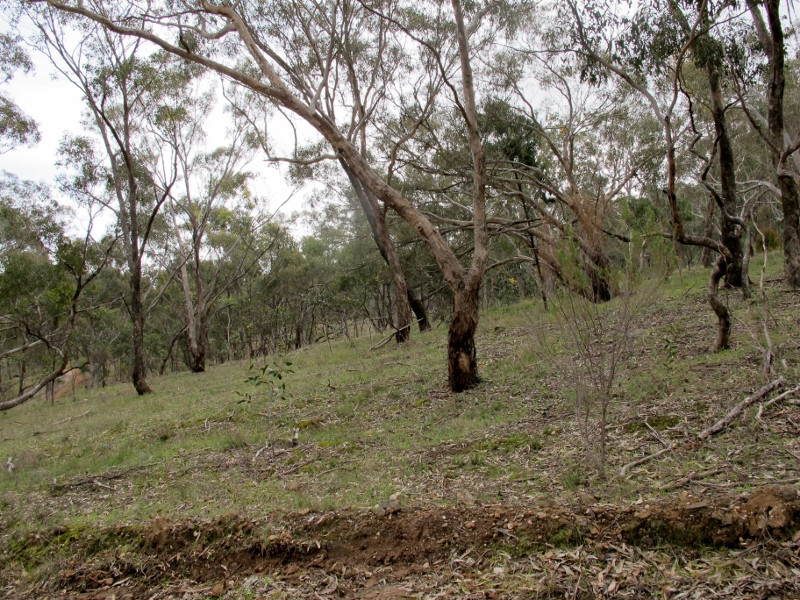 Mount Tarrengower, south side: it's proposed to burn this area every five years.

This is increasingly an important problem. For many years DSE has tacitly acknowledged that Zone I [which is burned every 5  years] is an ecological sacrifice area: it’s a permanent artificially created fire zone, probably infested with weeds. Recent changes to the prescriptions for Zone 2 mean that these areas are not much better. In other words, the requirement to prioritise concern for human life has been interpreted as the requirement to destroy large areas of bushland. The Tarrengower area is a good example: it is proposed to burn 90% of this 285 ha area at the top of the mountain every five years. This is disastrously inside the ‘tolerable fire interval’ established by fire ecology experts for this environment, and if it is pursued, the mountain will look very different inside fifteen years. DSE has acknowledged the impact this will have on natural values [not to mention tourism], and is apparently looking for ways to deal with it. In particular, it was suggested that the Zone 1 section of Kalimna Park may be fuel reduced by means other than fire. Zone 1 prescriptions allow for fuel reduction by means other than burning [for example, mowing or slashing]: it’s hard to see why these means are not used more widely.

are not public documents, however: and without them, the public can’t assess why a particular burn went the way it did. For example, we would dearly love to see the burn plan for the Tarilta Gorge: that would help us understand what went wrong: was it poor planning? poor implementation? bad luck? We’re discounting the last of these, but without access to the documents we won’t know the details.

Once again, DSE emphasised the contradictory demands being made on it by different community groups: winemakers and beekeepers like Spring burns, conservationists don’t. The Department tries to walk a tightrope to satisfy these competing demands, and one solution it has adopted is to try for late spring operations.

A certain amount of fudging goes on in these decisions. The Friends of Kalimna Park were told that ‘The Fire Operations Plan is developed in consultation with Biodiversity staff. This includes both the season selection (spring) and development of prescriptions in order to minimise ecological impacts’. When asked directly at the meeting what they had recommended about the Zone 1 burn planned for the Park, biodiversity staff answered: ‘Autumn.’ This recommendation was bypassed because a higher directive requires that all Asset Protection burns take place before the summer fire season.

There was some criticism in the meeting of DSE’s communication with the public. All government departments are probably open to this criticism, but the lesson is that the public has to pay fanatical attention to government action. FOBIF believes that DSE Bendigo is making efforts to improve in this area.

Suggestions that came out of the meeting about improved communications include:

–inclusion of more detail in the Fire Operations Plans

–easier internet access to the Fire Operations Plans: you need a fair bit of commitment to find a particular burn on the DSE website, and this could be simplified.

–there was a suggestion that DSE could set up a Facebook page, but this appeared to be greeted with some horror by the more elderly members of the audience.

Is it all worth it?

Is it worth all the trouble many people took to write the record number of submissions, and attend three hour meetings? In the words of one participant: ‘This will all be judged by what we see on the ground.’