The briefing was a sobering experience, since it was made plain to us that the entire fire management  system was governed by a government directive that 5% of the public land estate be burned each year.

In other words, the management burning program is based, not on an assessment of what the land in question needs [or, if it comes to that, on specific issues of public safety], but on a blanket figure which must be achieved come what may: if that figure is not achieved in a given year, then the deficit must be added on to the following year’s target.

This system is the one recommended by the Royal Commission. It is to be hoped that other recommendations of the Commission—on development in fire prone zones and transparent reporting of impacts on biodiversity—are followed with equal determination by the government.

DSE has set up four zones of public land for management burning purposes:

Zone 1: Asset protection zones. These  total in all 2.7% of public land. They are usually close to settlement, and will be burned severely: 90% of the declared area will be burned, and it will be burned relatively frequently. DSE concedes that, ecologically speaking, these are ‘sacrifice zones.’

Zone 2: Strategic wildfire moderation zones. These total 17.5% of public land. They will be burned somewhat less severely than zone 1 [80% coverage].

Zone 3: Environmental management zones.  These total 63% of public land. They will be burned more moderately than the other two—DSE will aim to burn one third of the land in these zones.

DSE maps of the proposed burn zones can be viewed here.

As to the particulars of the zoning system just released, we have two main problems, which we will put to DSE:

1. We would like to see the rationale behind the decision to rezone the area to the east of Newstead as ‘asset protection’. These zones are typically set to the west and north west of settlements, but the land in question, in the Muckleford forest, is to the east. It is botanically rich, and frequent severe burning would be destructive to no useful purpose. The choice of such a large area [576 hectares] is also suspect. 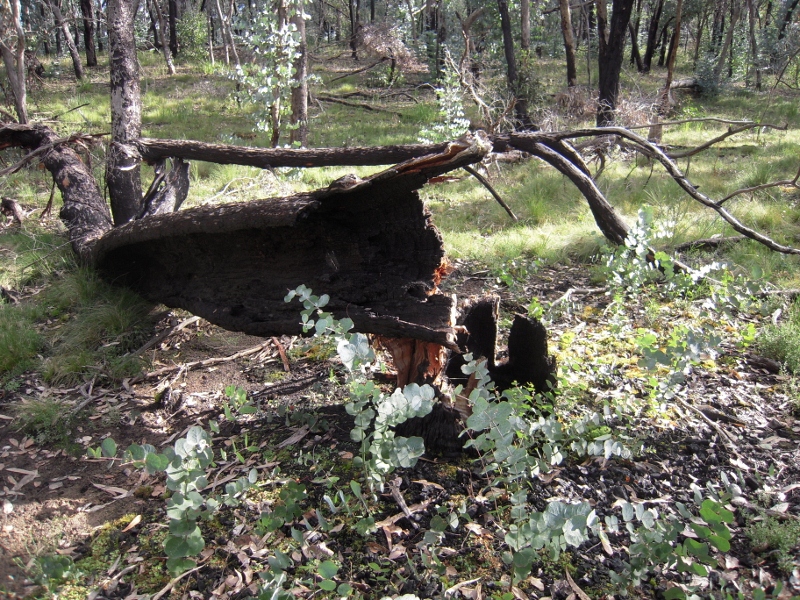 Habitat tree destroyed by 2010 reduction burn at Wewak track, with regenerating seedlings: DSE needs to restore confidence in its use of fire for 'environmental' purposes. Photo: Bernard Slattery

Fire scientist Kevin Tolhurst argued on ABC local radio on August 25  that these burn plans might work ecologically if they are ‘low intensity’.Given that DSE is hamstrung by essentially political requirements, we feel that its credibility as a land manager rests in the detail of how it manages its commitments.