FOBIF has made a short submission to the Department of Primary Industries as part of the consultation process for the preparation of a new Invasive Species Management Bill. 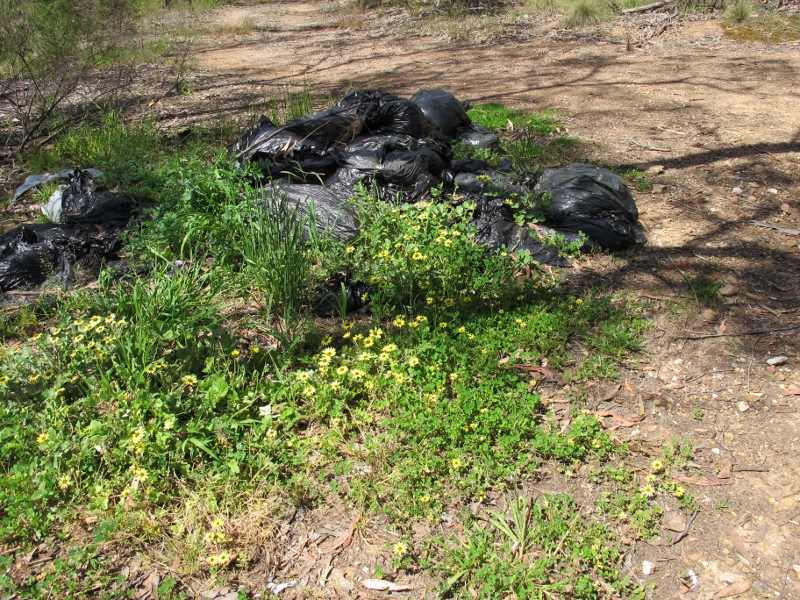 Dumped garden rubbish in the Diggings Park near Chewton: oxalis, capeweed and thistles are spreading from the dump. When Parks Victoria officers clean up such dumps, they have to pay tip fees to dispose of the rubbish.

The submission is in response to a discussion paper released by DPI. The paper proposed that the new bill require people to take every reasonable care to prevent the spread of invasive species. We urged that this provision be strengthened, given that many weeds are spread through carelessness–either on construction machinery or dumping of garden refuse. Recent examples of the former in our area include spread of Stinkwort and Needle grass on Shire machinery; and the dumping of garden rubbish is a constant headache for public land managers, who have to clean it up and then pay the Shire for tipping fees!

FOBIF’s brief submission is printed below:

‘We support any measures which will more effectively control invasive species in Victoria. We would like to make the following brief comments on the Discussion Paper:

“Accountability: The Government must explain its decisions on regulation and be subject to public scrutiny. The same is true of its enforcement agencies. As such, the development and enforcement of regulation in Victoria should be monitored, with the results being reported to the public on a systematic basis.”

‘A provision to this effect should be incorporated into the legislation.’

This entry was posted in News, Weeds. Bookmark the permalink.