We have received a second reply from DSE’s Paul Bates on the subject of the Tarilta management burn [see below]. In addition Ewan Waller, DSE’s Chief Fire Officer, fielded questions on the subject on ABC radio on Friday March 30. On the same day, the Bendigo Advertiser carried an item on the matter featuring a statement by DSE North West Regional Manager John Rofe to the effect that ‘the aim was to reduce the threat of fuel sparking a bushfire’.

The gist of all of the above is clear. 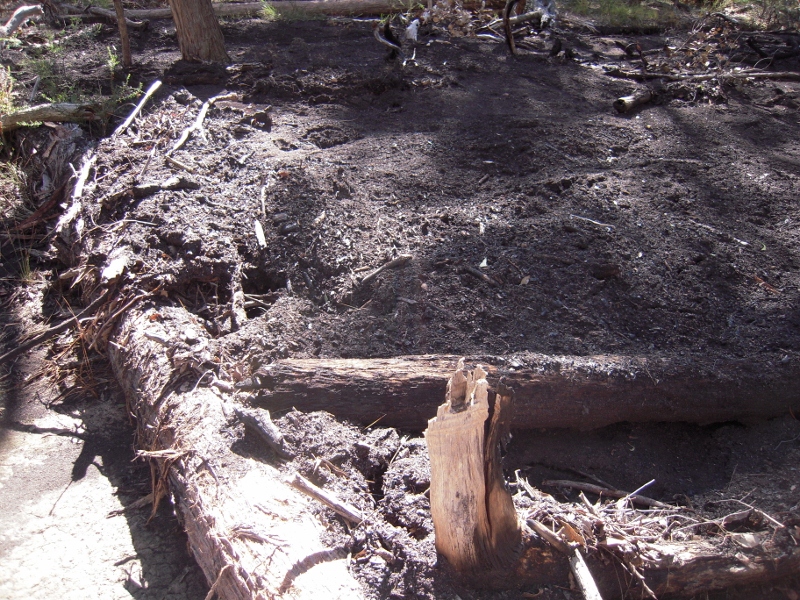 One of the less steep drainage lines in the Tarilta gorge area: this soil has been washed off the hilltops.

3. It’s clear that DSE has no control over what happens inside its control lines. In other    words, the idea of ‘cool burns’ is a very slippery one, as is that of ‘mosaic burns’, where patches of burned and unburned ground alternate.

4. It’s also clear that the objective to burn an area classified as a particular Ecological Vegetation Class is not based on any real knowledge of what might or should happen in the area in question. FOBIF urged DSE to consider carefully the effects of the adjacent 2010 Wewak track burn before proceeding with this one. It’s London to a brick that no such consideration was given.

Paul Bates letter is given below. We have interpolated our questions in italics:

In the light of the weather forecast, why was there evidently no effort to prevent soil loss from the steep slopes of the gorge?

‘In relation to the weather after the burn, as previously mentioned, DSE/PV monitor the weather and fuel conditions leading up to ignition of a burn as well as looking at forecasts for the days after a burn. In this case, weather conditions were deemed to be appropriate for the burn to proceed. I am not sure how much rain fell over the burn area in the following days or at what intensity it fell. BOM weather stations do provide accurate information at specific locations that may help estimate what may have happened on the burn area but the actual amount and intensity/duration of rainfall that resulted in the deposits in Tarilta Creek over the burn can not be known. As stated above, all relevant weather and fuel information, including forecasts for the following days and what impact weather factors may have on the burn is considered before a burn is ignited. ‘

What kind of supervision takes place during the burn to prevent ecological damage, like the destruction of possibly the biggest tree in the valley?
‘DSE/PV in the Murray Goldfields District puts a lot of time and work effort on the ground prior to a burn taking place at identifying and raking around large old trees. On this particular burn, I have been advised that DSE/PV had several (average of 5) field staff looking for and raking around large old trees for about two weeks prior to the burn. In relation to the large tree you have mentioned, once the burn has been ignited, it is not possible to have staff inside the fire area monitoring individual trees for safety reasons however trees around the edge of the burn are monitored as part of the regular patrol of the burn. ‘

What species did managers have in mind as potentially benefiting from this operation?
‘In the ecological management zone, DSE/PV do sometimes identify specific species that require fire to regenerate. It also common for EVC’s to be identified, not specific species, at the landscape level, that are either fire tolerant or fire dependant and that are long unburnt, with the management objective of applying fire to the area. The purpose of applying fire to such areas is to create range of age classes within the EVC, thus providing varying habitat types of different age classes across the forest.’