Fire: who knows how to use it?

DSE Chief Fire Officer Ewan Waller claimed on ABC Radio on March 30 that one of the aims of his department is to create a ‘pre European’ forest structure by using fire. This seems to suggest that he is familiar with pre European fire regimes. We’re not sure what these regimes were in our area, but it’s worth brooding on one recent effort to describe them.

In his book The Greatest Estate on Earth [Allen and Unwin 2011] Bill Gammage argues that Aborigines used fire not as a simple survival tool, but as a sophisticated means of shaping the environment: and that they made Australia a ‘farm without fences’ with it, a place frequently referred to by early white settlers as ‘a gentleman’s park’.

Gammage argues that Aborigines used fire throughout the continent, but the picture he creates of indigenous methods of burning provides an interesting contrast with the kind of massive, blunt and destructive exercises we are seeing today. In brief:

–Aboriginal groups had territories they understood in intimate detail.

–their burns were small scale, modified for different species patterns, conducted with an expert eye on the weather, and controlled. Although he doesn’t discuss practices in our area, he mentions, for example, that in the Western Desert, most patches burnt were ‘less than five hectares.’ This contrasts dramatically with the hundreds of hectares being burned around here, and the thousands being done at a time in the Mallee. 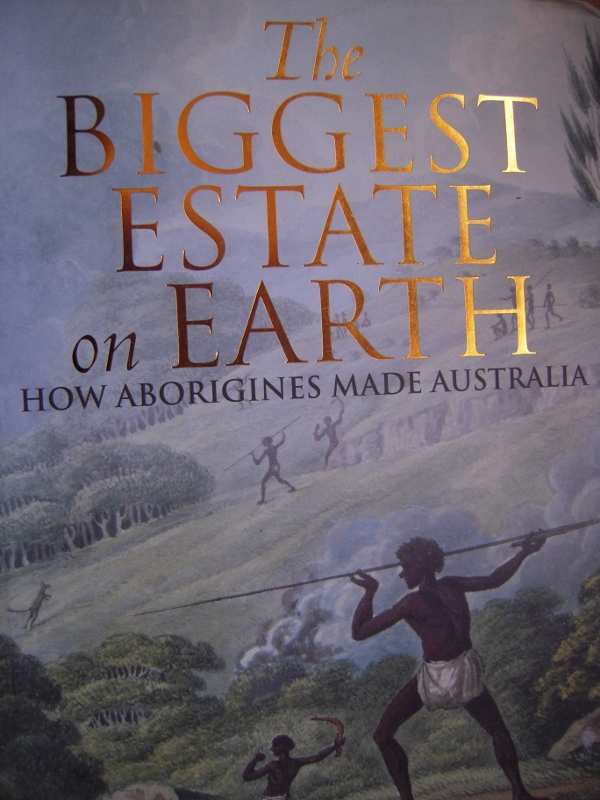 –They managed their territories in varying degrees of intensity depending on use, spiritual significance, etc

–Management included long periods without fire for some areas [eg, no burning for ‘generations’] if that is what they perceived the country as needing.

–They were conscious of shape, topography and access, and burned diligently at, say, forest edges, clearings, access routes.

–Aborigines timed ‘most [not all] fires to go out at night: overnight fires could confess loss of control’.

–They very rarely killed mature trees with their fires.

None of the above sounds like the kind of burning applied to the land under the current five per cent system. It’s interesting that Gammage notes that European settlers started imitating Aboriginal practices without understanding exactly what they were doing, with disastrous consequences.

Gammage’s book is in some respects controversial, and no doubt will be much discussed by environmental historians. He hasn’t helped his case by speaking on radio appearing to support extension of modern ‘control burn’ programs that bear no resemblance to the kind of thing he describes. But his underlying message is worth thinking about: with the destruction of Aboriginal culture, he says, ‘Knowledge of how to sustain Australia, of how to be Australian, vanished with barely a whisper of regret. We have a continent to learn. If we are to survive, let alone feel at home, we must begin to understand our country.’