Our FOBIF show now named Responding to Country: Friends of the Box-Ironbark Forests 1998-2023 will be opened by natural historian and environmental photographer Alison Pouliot on Saturday, February 25 at 10.30am at the Newstead Arts Hub. It will run for 3 weekends (February 25 & 26, March 4 & 5, 11 & 12) and Labour Day (March 13). Gallery opening hours are 10am to 4pm.

The show will include 20 photos with accompanying text by FOBIF members and supporters, children’s art from Chewton Primary School, FOBIF historical information, and geology exhibits. Three of the founding members of FOBIF, Marie Jones, Phil Ingelmells and Tami McVicar have been involved in the preparation of this show. Phil has written this article about the formation of FOBIF. You can see the photos contributed so far here.

All are welcome to come to the opening. Exhibition photos, FOBIF books and an exhibition catalogue will be for sale. Refreshments will be provided.

‘In the gloom of the forest floor, fallen branches are sheathed with fungal stripes of yellow and purple. But beneath the colourful surface, the fallen litter is alive with the clandestine workings of fungi.’ 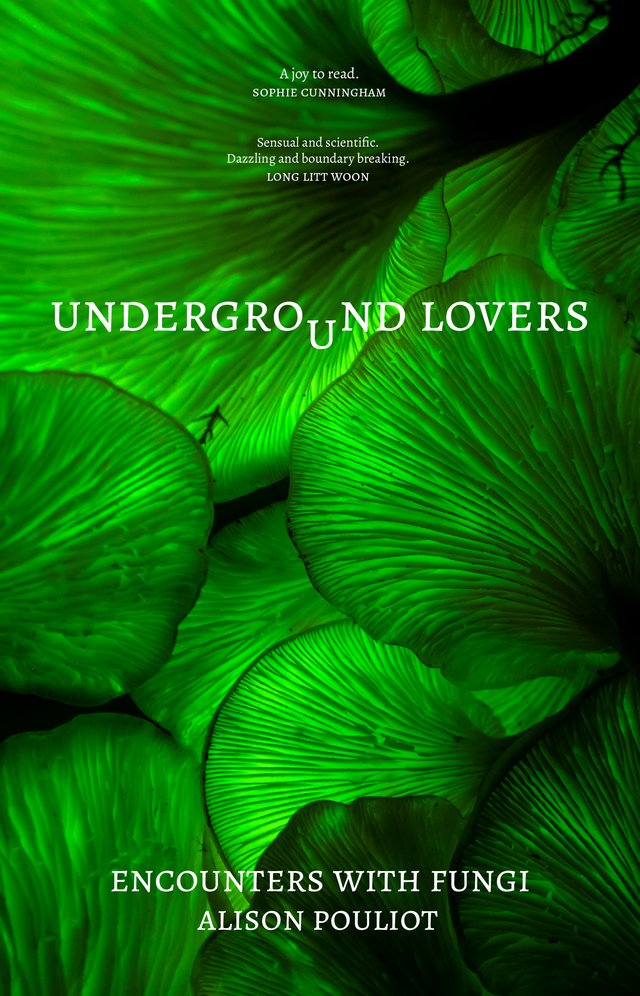 What can we learn from the lives of fungi? Underground Lovers brings us to our knees, magnifier in hand, to find out.

Fungi offer a way to imagine life differently. In Underground Lovers Alison Pouliot reaches down to earth, and deeper, to dwell with fungal allies and aliens, discover how fungi hold forests together, and why humans are deeply entwined with these unruly renegades of the subterrain. Told through first-hand stories — from the Australian desert to Iceland’s glaciers to America’s Cascade Mountains — Alison Pouliot shares encounters with glowing ghost fungi and unearths the enigma of the lobster mushroom. Melding science and personal reflection, she explores the fungi that appear after fire, how fungi and climate change interact, the role of fungi in our ecosystems, and much more.

Alison’s new book will be launched at Radius, 76 Main Road, Hepburn, on Wednesday 15 March at 6pm. All welcome. More details can be found here.

One more contribution to FOBIF turns 25

Liz Martin has sent us this contribution. 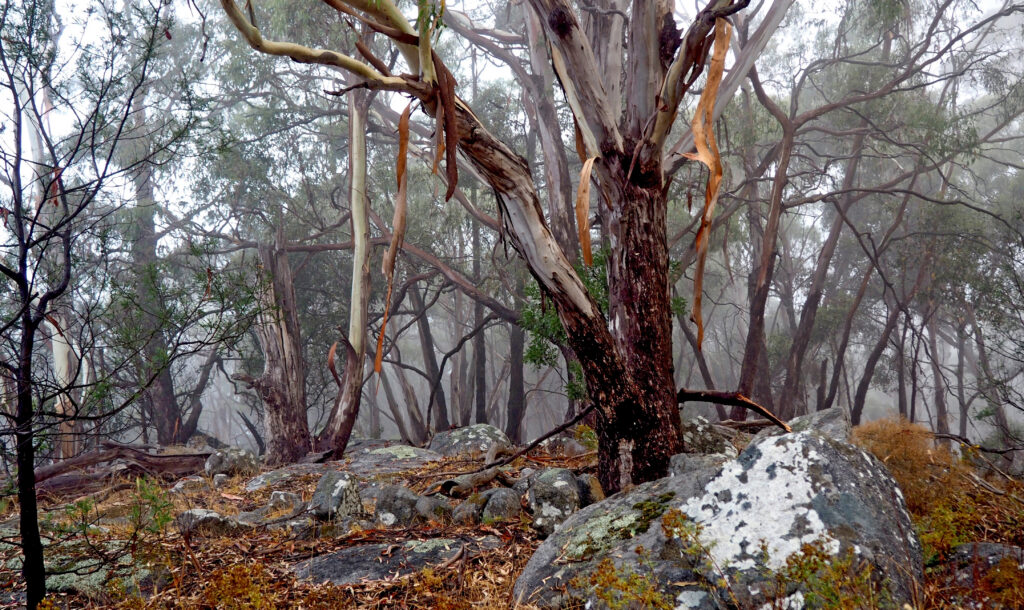 I love to wander the ridges and gullies.

I often walk and find new places that I name. Valley of the dead trees is one.

The different environments from the summit mist to the drier valleys are all worth exploring.

It is also a place for family walks and celebrations at the picnic ground or dog rocks.

I love the misty days and the ancient rocks: the moss beds and the fascinating fungi.

It is also my refuge when life gets overwhelming and I wander the different areas with my camera, seeking out the leaves that have fallen,  lichen on the rocks and look forward to the fruiting of the mosses.

Subscriptions are now due

We have recently sent our 2023 FOBIF newsletter with a renewal membership form to members. If you haven’t received one or would like to become a member you can find the membership form and payment details here.

Have your say: MAS draft budget

Mount Alexander Shire residents have been asked to complete an online survey about priorities for MAS spending in the next financial year, 2023- 2024. The survey is a good opportunity to make submissions that recognise the natural environment as a priority, especially in the face of the climate and biodiversity crisis. There is a little over a week before the survey closes on (February 2). It can be found here. FOBIF’S submission can be found here.

We have had a terrific response to our call for contributions to our FOBIF turns 25 exhibition. You can see all the entries here. The closing date for contributions is in just over a week (31st January). You can find the details here.

Euan Moore and Bronwyn Silver have contributed the following photos and accompanying text.

A Visit from the Emperor (Euan Moore) 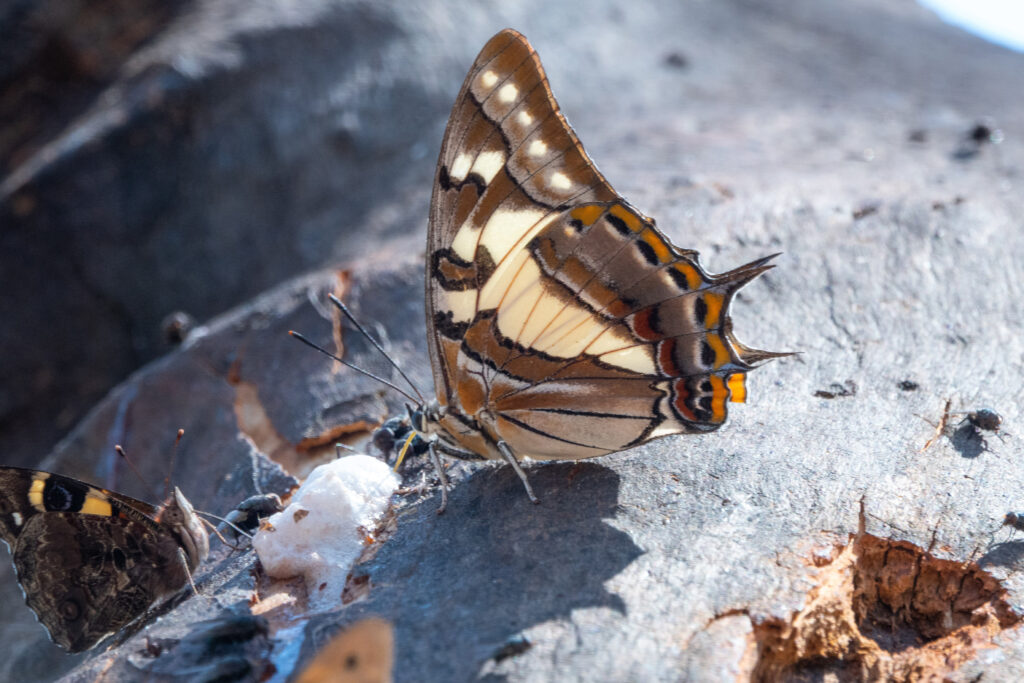 The Sugar Gums at Kalimna Point, while not native to the area, provide resources for many of the smaller animals that live in our forests.  One of the larger trees on the slope below the rotunda has been used by Sugar Gliders whose sharp teeth have cut into the bark causing the sweet sap to ooze out.  This sap is the nourishment which the Sugar Gliders seek. It continues to bleed long after the gliders have retired to their hollow at sunrise.

The sap provides a bounty for insects that would otherwise be seeking nectar from flowers at a time of year when there are fewer plants in flower. Word, or the scent, had obviously got out.  On a warm January morning there was a cloud of butterflies feeding from the Sugar Gliders’ table.

Tailed Emperors are one of our largest butterflies. Their wingspan can be up to 85mm. The photo shows one sharing the ‘table’ with a Yellow Admiral as they feed on the white frothy sap. At the lower right is a scar from an earlier visit by the Sugar Gliders.

There was continuous activity at the tree as the morning warmed up.  Common Browns were there by the dozen. There were numerous Yellow Admirals, an occasional Marbled Xenica and of course the Tailed Emperors. There were even a few insects that had become trapped in the sticky treat.  Will these be the next round of fossils preserved in amber?

We don’t see Tailed Emperors in Victoria every year.  They are more common in northern New South Wales, Queensland and the Northern Territory.  There were several sightings around Castlemaine in 2012 but few since until they showed up again this summer.  It may be that the very wet conditions further north have enabled their numbers to increase. 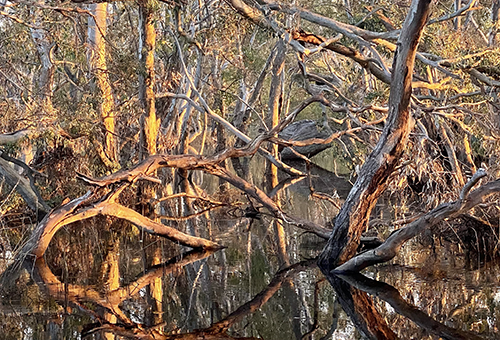 Our region is not known for its wetlands but Bells Swamp covers about 40 hectares at the very northern edge of the Shire. Most of the time passers-by on the Maldon-Bridgewater Road see only an unremarkable area of River Red Gums surrounded by farming country, but in a wet year the swamp becomes a stand-out landscape.

In wet years like 2011, 2016 and again in 2022 it is transformed into a wonderland of wetland birds with the River Red Gums and wetland plant life flourishing after years of drought.

Bells Swamp was dry between 1996 and 2009 but flooding after heavy rains beginning in late 2010 meant the swamp was still more than a meter deep in places in November 2012. After the 2022 rains it is again pretty deep and likely to be flooded for many months.

Reflections of the tangled wetland vegetation are especially stunning at dawn when the light is soft and golden. It’s worth getting up for.

The 2023 FOBIF walks program is now on the website. The first walk is on Sunday 19 March. All walks start at the Community House in Templeton Street at 9.30am apart from the July 16 Long Walk led by Jeremy Holland which will start at 9am. All members and supporters are welcome.

Colours from an ancient ocean

There are many sites around the Castlemaine area where 19th Century gold miners have removed all traces of soil in a process called ‘ground sluicing’. A blight upon the environment, but also, a wonderful opportunity to take a peek at the world beneath our feet.

These photos reveal one such pavement of thinly layered and intriguingly coloured mudstone. Apart from the colour, the most obvious feature in the photo is the parallel lines. The lines are the edges of thin layers of mud which were deposited on the seafloor millions of years ago (Photo 1). Most of the tiny layers appear to be very fine-grained mudstone, but some layers may be siltstone which is slightly coarser in grain-size.

But what causes the ochre like colours in the rock? We can see from the fine grain size of the rock and the thin layering that the mudstone was deposited on the seafloor at a time when bottom currents were gentle or even absent. This created an oxygen poor environment which was just right for the mineral pyrite (FeS2) to form in the muddy muck. After the mud turns to stone, and despite all the upheavals over the eons, pyrite remains in its pure state as tiny cubic crystals, that is, until erosion finally exposes the rock near the surface. When rock is exposed to within about 30 metres from the surface the oxygen-bearing groundwater reacts with the pyrite to form iron compounds that move through the weathered rock and start to fill cracks, or more porous parts of the weathered rock. These iron bearing minerals are called limonite or goethite – and these are the red-brown, or ochre coloured streaks (Photo 2). 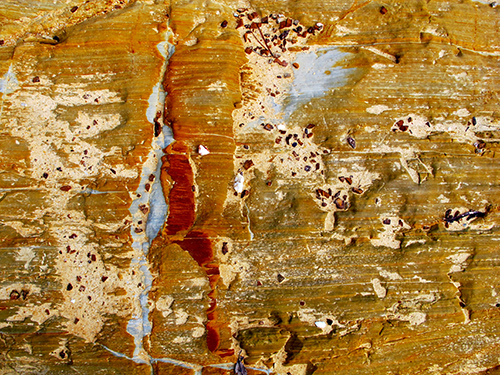 Photo 1: The fine horizontal lines in this photo are the edges of dozens of thin layers of mud and silt that were laid down on the ocean floor. The dark brown fragments are pieces of limonite or goethite that have been weathered out of the outcrop and now just floating around. 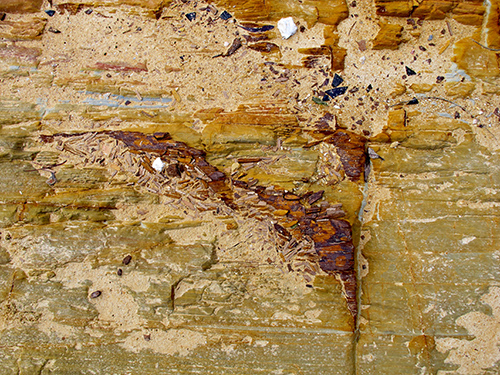 Photo 2: The red-brown diagonal streak is probably a concentration of limonite formed along a tiny quartz vein.

This is the ninth  post in our geology series written by Clive Willman.

Another contribution to Fobif turns 25 show

Phil Ingamells has sent in the this photo and text for the Fobif turns 25 exhibition. New contributions from Janet Barker, Christine Henderson, Damian Kelly, and Philip and Judy Hopley, can be found here. 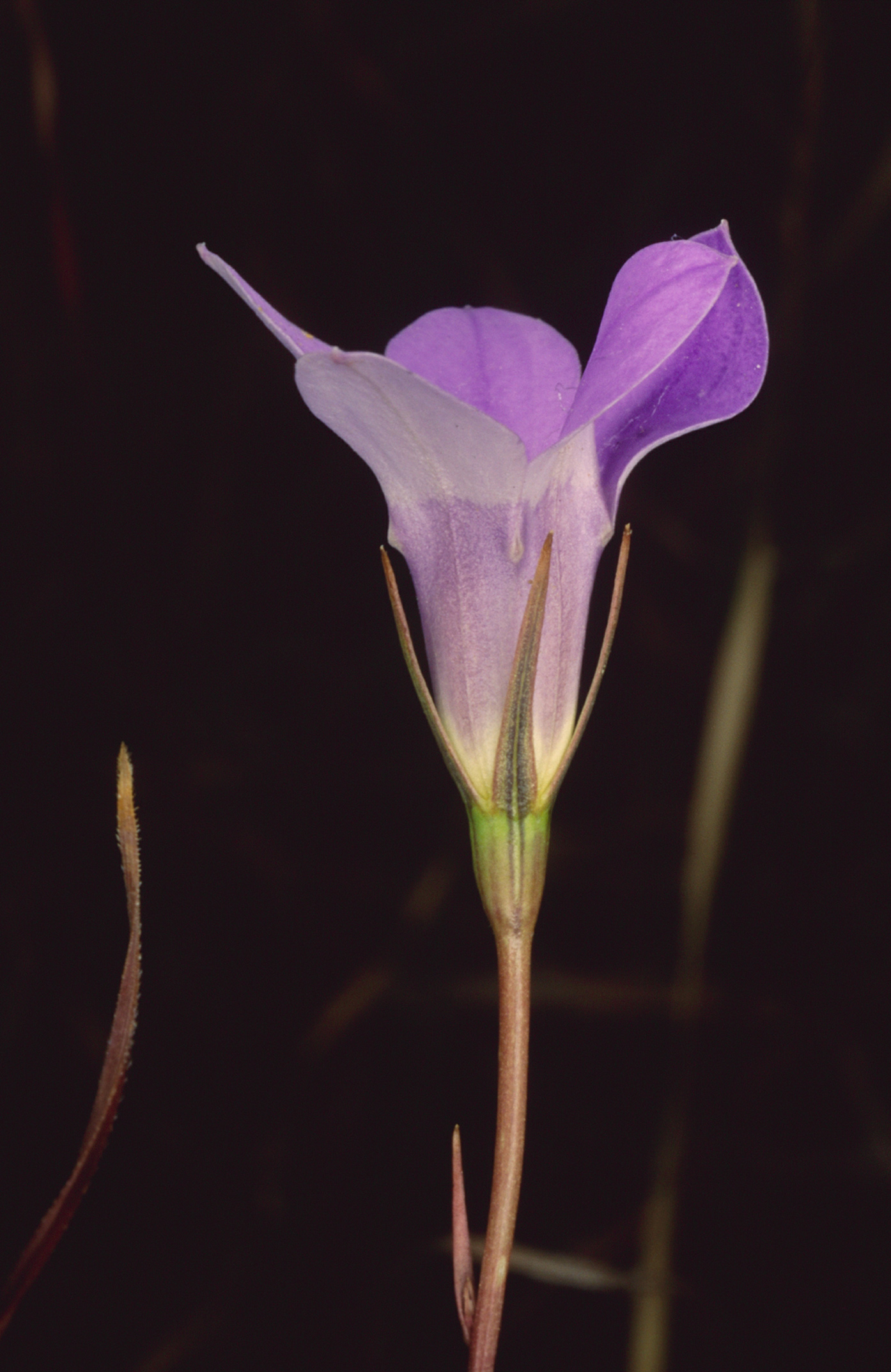 There are so many ways to see the natural world: as a complex web of interdependence; as a tough dog-eat-dog world of competitiveness; as a fragile, broken system now in need of rescue. All of these, and more, are valid views.

But for my pleasure, I can’t help seeing the natural world as something that outperforms the finest of our designers, architects, engineers and decorators. Evolution has produced a myriad of lifeforms that, at close scrutiny, startle us with their subtlety, their grandeur, their efficiency of design and their downright stunning beauty.

We can track the refinement of individual species through zillions of modifications over millennia, through the rough and tumble of survival, or we might see the trace of some guiding cosmic hand. Whatever remarkable path we might attribute nature’s evolution to, it has produced a glorious heritage, worthy of the utmost respect from us as individuals, from our land managers, and from those who govern us.

Its protection should be ‘core business’ for any responsible society, yet recent generations have put unprecedented pressure on what remains of that heritage.

We too are a product of that journey, part of evolution’s family, but we are a long way from ensuring that the family will survive. 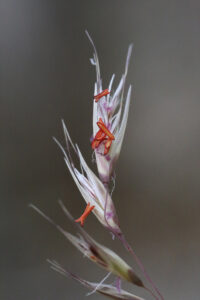 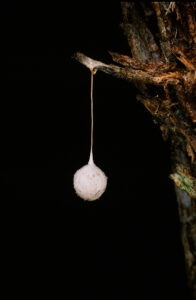 Jeremy Holland and Jane Rusden have sent these photos and accompanying text for our Fobif turns 25 exhibition. There is is a few weeks to go if you would like to be part of this project. Check out the details here. 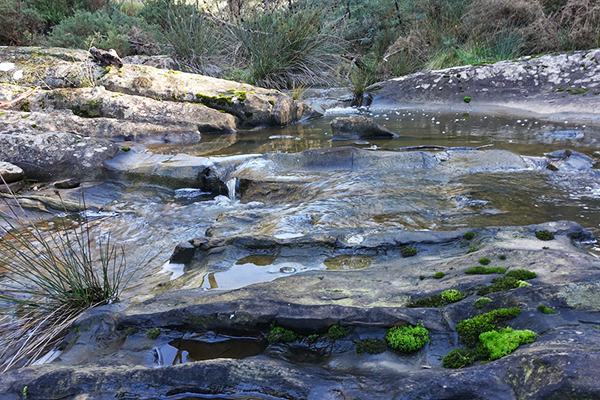 For me one of the most endearing features of our bush is its generally open nature.

This allows for relatively easy and enjoyable walking away from roads and tracks following natural features such as ridge-lines, spurs, creeks and gullies.

It is such a pleasure to be able to plan out a route and then proceed with it and thoroughly explore an area.

One of my favourite areas for this is around Tarilta Creek with its beautiful grassy flats interspersed with steep cliffs and interesting side gullies, sometimes with an occasional waterfall. 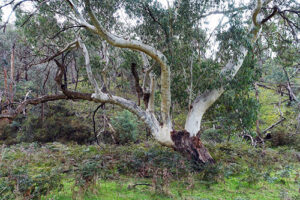 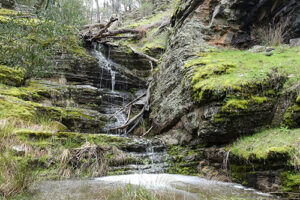 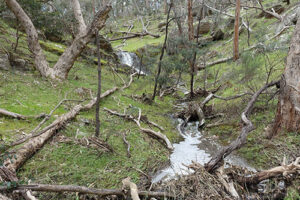 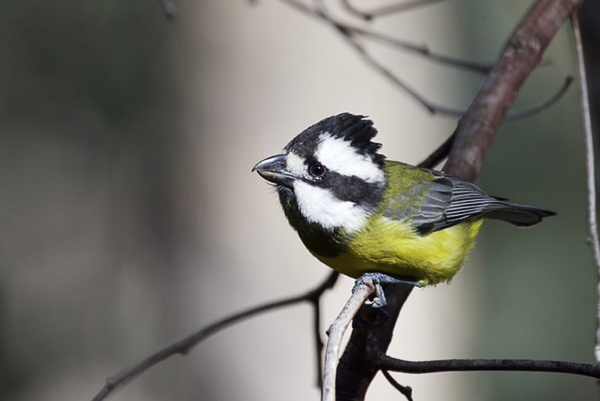 Crested Shrike-tits live along side us on our bush block, particularly in spring, they can be easily seen on a day basis which is a huge treat. The gully is full of Greybox and Whitebox, it’s a dry grassy woodland EVC. Often I hear them tearing bark as they search for an insect meal, which is how their presence is commonly discovered. I love their black crest, which looks like a Mohawk with a good dose of attitude. Their splash of vivid yellow is a welcome sight during cold grey days, which never fails to light my spirit.