It’s a miracle! Scott Morrison was right! And wrong! At the same time!

The early start to the bushfire season has generated a debate about the connection between climate change and bushfires. This is another debate we can expect to sputter on over summer.

It’s important to be clear about what the argument is here. A warming climate does not cause fires: but  hotter, dryer conditions make outbreaks caused by lightning, arson or something else more likely, more likely to be frequent, and more likely to be serious. The country is drier and hotter, and the explanation for this has been laid out in innumerable scientific papers and attested by senior fire fighters. The equation is pretty obvious to anyone not seduced by conspiracy theories or the wilder explanations of the internet (like Barnaby Joyce’s claim that the sun’s magnetic field is to blame for our problems). Those who reject it are, by and large, those who reject altogether the reality of human induced climate change

Would the situation have been less serious if the Coalition Government had acted decisively to limit or reduce Australia’s contribution to global warming? The Prime Minister has rejected the idea outright: ‘I think to suggest that at just 1.3% of emissions, that Australia doing something more or less would change the fire outcome this season – I don’t think that stands up to any credible scientific evidence at all.’ In one sense, he’s absolutely right.

As many right wing commentators have pointed out, if Australia reduced its carbon emissions to zero it would have no effect at all on the rate of global warming. In support of this argument, Herald Sun columnist Andrew Bolt cited Australia’s Chief Scientist, Alan Finkel. Mr Finkel responded by labelling Bolt’s claim as ‘a complete misrepresentation of my position…’. He went on:

‘On 1 June 2017 I attended a Senate Estimates hearing where Senator Ian Macdonald asked if the world was to reduce its carbon emissions by 1.3 per cent, which is approximately Australia’s rate of emissions, what impact would that make on the changing climate of the world. My response was that the impact would be virtually nothing but I immediately continued by explaining that doing nothing is not a position that we can responsibly take because emissions reductions is a little bit like voting, in that if everyone took the attitude that their vote does not count and no-one voted, we would not have a democracy.

‘Similarly, if all countries that have comparable carbon emissions took the position that they shouldn’t take action because their contribution to this global problem is insignificant, then nobody would act and the problem would continue to grow in scale.’

There are about 15 other countries with emissions comparable to ours, accounting for over 20% of global emissions. If we followed the logic of Morrison and Bolt, none of them should be concerned about their emissions—clearly a ridiculous position to argue.

The current government can’t be held directly responsible for the recent fires: but if conditions become more severe, its responsibility as a global citizen will be harder to evade.

Posted in Fire Management, News | Comments Off on It’s a miracle! Scott Morrison was right! And wrong! At the same time!

So: how’s the climate here?

The Bureau of Meteorology and the CSIRO have released a series of local climate guides summing up the changes in the last few decades around Australia. The guide for North Central Victoria can be found here. It reveals that average rainfall in Bendigo has decreased by 30 mls  a year over the period from 1989, and the average number of days over 38 degrees has doubled from two to four. There are plenty of other stats for you to wrangle with too, on the detail of frost, seasonal rain variations, etc. Have a look.

Posted in News | Comments Off on So: how’s the climate here?

Members and supporters of FOBIF are welcome at this years BBQ breakup in Walmer. Find out where and what to bring here.

Posted in News | Comments Off on FOBIF breakup reminder: 9 December

On Monday 9 December Friends of the Box-Ironbark Forests is having a BBQ at Bronwyn Silver’s place in Walmer.

It starts at 6 pm and the address is 1036 Muckleford-Walmer Road, Walmer.

BYO
*  food to share, including something for the BBQ if you like
*  plates, glasses, cutlery
*  drinks
*  a chair

All FOBIF members and supporters are welcome. Enquires Bronwyn: 0448751111.

Posted in News | Comments Off on FOBIF 2019 breakup

Presentation: The Secret Life of Mistletoe

There will be a presentation on Thursday 21 November at Newstead Community Centre, Lyons Street, Newstead at 8pm. The subject is ‘The Secret Life of Mistletoe’ by David M Watson. All welcome. A gold coin donation would be appreciated.

David M Watson is Professor of Ecology at Charles Sturt University and an international expert of mistletoes. In addition to the ecology of parasitic plants, his research focuses on large-scale connectivity conservation and developing innovative approaches to biodiversity monitoring and measuring ecosystem health.

Newstead Landcare Group is delighted that Prof. Watson is coming to Newstead to present a talk on this enigmatic group of plants. Lacking roots, depending on other plants for their survival and relying on animals for dispersal, mistletoes have inspired a range of beliefs throughout the world. Some people regard them as magical, endowed with special powers; others as destructive weeds that devalue native habitats. In his talk David will review two decades of his research on these plants and share his emerging view of these plants as beautiful native wildflowers that support wildlife and boost productivity.

Prof. Watson will have copies of his book for sale at the event, “Mistletoes of Southern Australia” published by CSIRO.  It is the definitive guide to all 47 species of mistletoe found in southern Australia. This new edition consolidates current knowledge about the natural history, distribution, biology, ecology and management of mistletoes in one convenient source. Illustrated with beautiful paintings as well as photographs of mistletoes and the animals that depend on them. 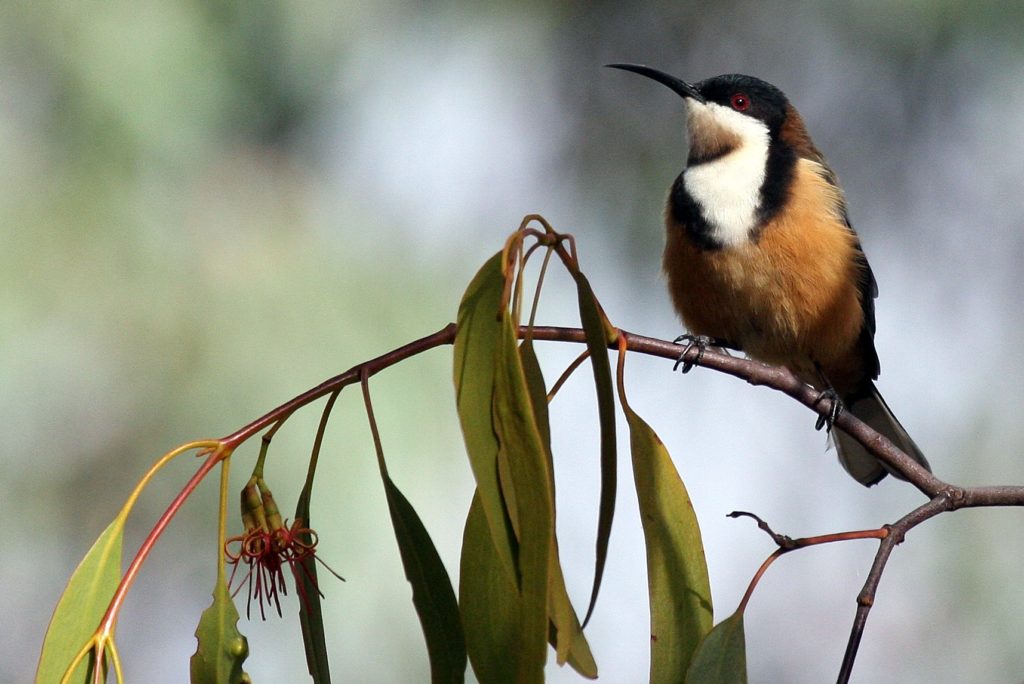 Posted on 13 November, 2019 by fobif
Wild deer are now listed as a high priority pest animal in many jurisdictions across Australia and more stories are emerging of landholders being increasingly impacted by deer, while members of the public are very concerned about deer damage in public land.

Peter West, National Coordinator of FeralScan and Invasive Species Officer with the NSW Department of Primary Industries, said the number of reports coming through DeerScan in recent months has helped to highlight problem areas and enabled us to develop detailed knowledge of where and how deer are using the landscape.

“This information is now allowing land managers and governments to better target management strategies to reduce deer impacts to farms and the environment,” Mr West said.

However, Mr West also reiterated that all data collected through DeerScan is managed securely and exact locations of deer sightings are not made publicly available.

Individuals and landowners can record sightings into DeerScan. To set up your community group within the program, visit the website or email feralscan@feralscan.org.au  for support.

To report deer sighting, their impacts and management, simply visit www.deerscan.org.au  or download the free FeralScan App from Apple and Google Play.

The weather’s warming, and reptiles are out. It’s time to be careful wandering in grassy areas. And of course it’s time to pay attention on the highway, so as not to be part of the ongoing slaughter of our reptiles. 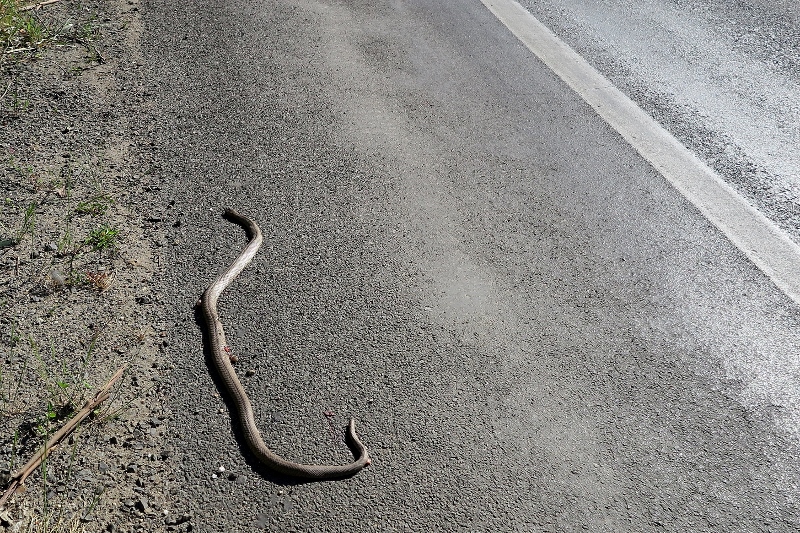 Midland Highway, October 22: dead reptiles are a far too common sight on our highways.

The photo above is of an Eastern Brown snake on the Midland Highway. It’s one of the country’s most venomous, but like any other creature it has its fascination: and it’s worth reading the fascinating information on the National Museum website. Here are a few excerpts:

‘The species’ known predators include birds of prey and feral cats. They appear to have immunity to the venom of a would-be predator, the Mulga Snake (Pseudechis australis), as well as their own species (one snake that had been swallowed by another Eastern Brown was regurgitated an hour later, apparently not too much worse for wear). However they are not so fortunate with the effects of cane toad venom and rapidly die from ingesting them…

END_OF_DOCUMENT_TOKEN_TO_BE_REPLACED

Posted in News | Comments Off on Summer’s coming, and here’s evidence

Elaine Bayes has supplied us with details of a terrific program of activities designed to improve knowledge of the Eltham Copper Butterfly. Details are below:

If you would like to help protect Eltham Copper Butterflies or would simply like a purpose while walking out in the bush, then come and join us in finding where ECB are so that they can be protected from threats.

If you are just curious and want to learn more about ECB then come along to the ECB monitoring education session or Castlemaine Field Naturalist talk.

If you would like to become an ECB Monitor and carry out searches either with our group or on your own, then join us on the ECB Monitor Training Events, so that you can learn how to contribute to conservation of the amazing Eltham Copper Butterfly. Contact Connecting Country  to attend this years events, which are supported by the Norman Wettenhall Foundation and Mount Alexander Shire Council.

12-4 pm Saturday 16 November 2019 ECB Monitor Training event. -Introductory Session. This is a training day on how to monitor ECB.  The following ECB training sessions will be carrying out ECB searches.

Trained ECB Monitors are also invited to join Karl Just and Elaine Bayes on their searches throughout Nov/ Dec on the following dates (these may change depending on the weather, so contact us at elaine@rakali.com.au if you would like to be updated).

Posted in News | Comments Off on Celebrate the butterfly!

A strong contingent took on brisk weather and a couple of strenuous climbs on FOBIF’s October walk yesterday. The route took the group from the Railway Dam up to the Fryers fire tower, down to Fryers Creek and up again to ‘Hill 488’, the highest point between White Gum Track and the Railway Dam. The effort was significant, and the rewards were rich: terrific displays of Billy Buttons, Sticky Everlasting, Bendigo Wax and sundry peas, among many other things—not to mention impressive patches of Spider Orchids. The final stretch took the group through dense fields of Chocolate Lilies on the cusp of blooming…another week and ‘Hill 488’ will be even more spectacular.

Our thanks to Jeremy Holland for yet another imaginative and rewarding route. This was the last Sunday  walk for the year—but see here for details of the Matted Bush-pea excursion this coming Wednesday (the 23rd). 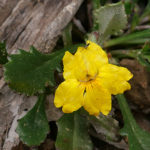 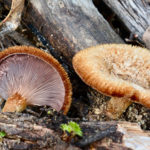 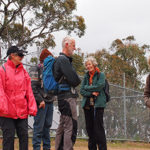 On top of the Tower Hill. Liz Martin 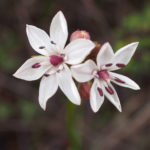 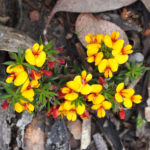 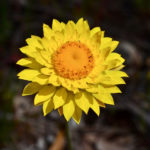 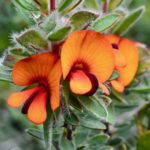 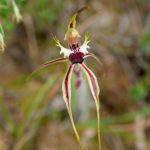 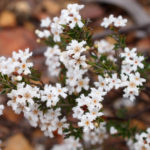 Click on the thumbnail images below to see compete photo. Each folded card is 10×14.5cm with details of the photograph on the back.

They are now available for sale as a set of 8 with envelopes. Cost for the 8 cards including postage is $20. Click here for purchase details. 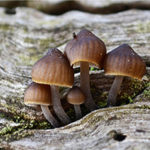 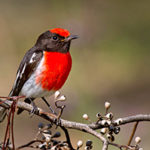 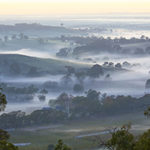 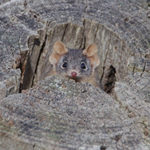 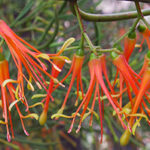 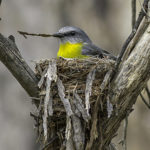 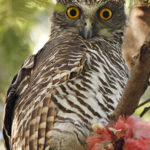 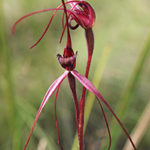 Posted in News | Comments Off on NEW: FOBIF greeting cards