Gold 1: What do you want to remember? What would you rather forget?

What does the phrase ‘extensive vegetation modification’ mean?

Answer: in Heritage speak, it’s a reference to what happened to our landscape during the gold rush. It’s code for: trashed landscapes, ruined waterways, denuded forest lands.

Why do heritage documents use such gormless terminology when talking about the history of the goldfields?

Answer: because in general ‘heritage’ is the nice side of history, the parts we want to remember: evocative buildings, romantic stories, heroic deeds. The dark side of history can be wrapped up in phrases like the one above, which mean practically nothing, and therefore can be skated over in a blink. 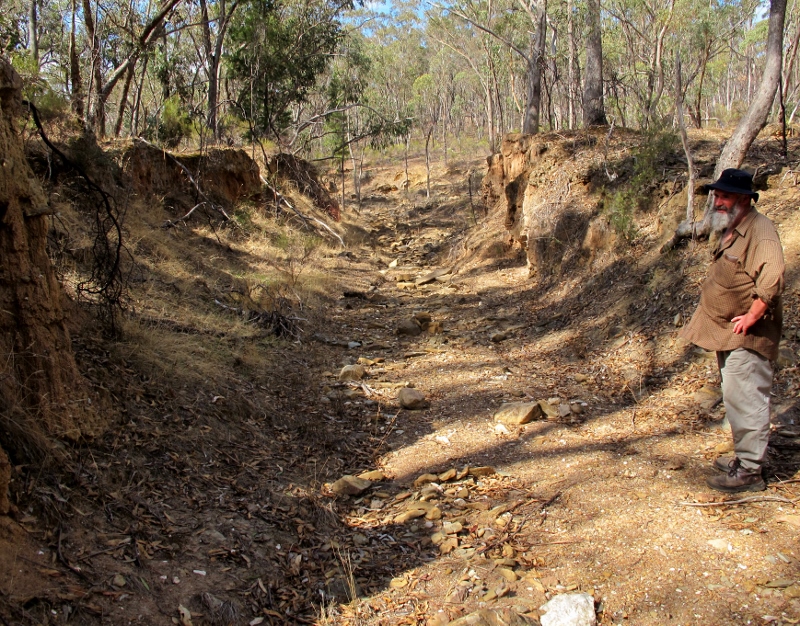 The late Doug Ralph in Dirdy Dick’s Gully, 2013. Anyone who pays even minimal attention will notice the shocking erosion of our creeks, and the fact that our forests are struggling to recover from the rampant exploitation of the past. But heritage guides turn our attention away from these things, disguise them under bland phrases like ‘extensive vegetation modification.’

The phrase ‘extensive vegetation modification’ is quoted on page 36 of the latest heritage management document for the Castlemaine Diggings NHP. To its credit, this latest document doesn’t fall for such a misrepresentation of environmental history, though for our liking it’s still a bit subdued when talking about the destruction wrought in the gold rushes. In this, it’s right in the tradition of heritage talk generally: one of the worst examples being the National Heritage declaration for the park, which observed, solemnly, that ‘The degree of alteration of, and intervention in, the natural landscape makes a strong impression on visitors.’ Really? We would suggest, ‘Visitors will be appalled at the way the country was torn to pieces in the desperate rush for gold.’

Three major transformations happened with the discovery of gold in Central Victoria. They’re interlinked, and can’t be separated:

Any serious effort to appreciate what happened in the 19th century should deal honestly with all these questions.

Unfortunately, discussion of ‘heritage’ is usually anchored in this Macquarie definition of the word: ‘the culture, traditions and natural assets preserved from one generation to the other.’ In other words, it’s stuff we want to remember, not the stuff we’d rather not take responsibility for.

So the ‘heritage’ we have in the goldfields is…gold and the people who worked for it. It seems that mainstream Australian society has difficulty accepting that the wreckage of our environment and that of Indigenous culture are part of that heritage. So in heritage discussions these two indisputable realities of our history are usually treated as sideshows to the main event.

There have been two Heritage Action plans produced for the Castlemaine Diggings National Heritage Park: the first in 2002, and the second in 2017. This last has been inexplicably kept under wraps by Parks Victoria. It’s worth reading, and you can find it here.

So how do these documents deal with FACT 2 and FACT 3 above?

The 2002 Heritage Action Plan explicitly set questions to do with Aboriginal Heritage aside—not as a dismissal, but as a major separate project. The Plan did, however, draw attention to environmental damage, and made the point that the local bushland could be presented in a way that ‘highlights the transience of mining, demonstrates the severe environmental impact that can result from inadequate environmental constraint, and illustrates some of the resilience of Australia’s native vegetation.’ (page 29)

You’ll struggle to find any heritage literature making that point about gold history. After all, it’s political dynamite: it makes the point that after the stuff has been dug up, we still have to be sustained by the land…and if we’ve ruined the land, we may be in long term trouble.