A small group of heroes tackled FOBIF’s May walk, in spite of unfriendly weather forecasts and a slightly forbidding walk description, which piled threat on threat: climbs, creek crossings, fallen logs and loads of gorse.

All participants survived this grim prognosis, however, and the excursion into the less travelled end of the Tarilta gorge delivered rewards definitely worth the effort, including impressive valley walls and good displays of fungi. The valley floor features magnificent Candlebarks, and there’s an unusually wild atmosphere in this corner of bushland.  The weather was mild throughout. The gorse, though predictably annoying, proved to be a paper tiger, albeit a prickly one. OK, that’s a mixed metaphor, probably. In any case, it’s worth pointing out that the infestation of Tarilta Creek by gorse, from Mount Franklin down, is quite scandalous. Though at its worst at the south end, the weed is gradually getting worse through the valley, and it would be good to think that DELWP had some kind of strategy to deal with it.

The walk route traversed areas in which dense regrowth of Messmates and Wattles, almost certainly outcomes of the 2012 management burn, blocked out entire gullies.

Our thanks to walk leader Bernard Slattery, although he made several predictions of disaster which failed to eventuate.

The June walk will be led by Christine Henderson in the Fryers Forest. Check the program for details. 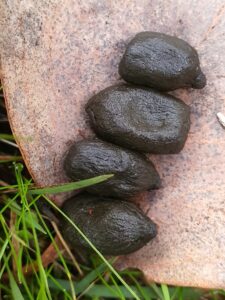 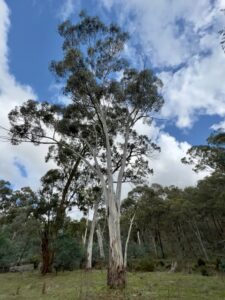 2 Responses to All threats averted