What is it? And where is it going?

So: what’s that grey discolouration in the water of Forest Creek at the Wheeler Street bridge, after rain last week?

Answer: It’s pollution runoff come down the gutter from somewhere in the town. We won’t speculate as to exactly what works–in fact, it’s reasonably common for rubbish and other pollutants to pour into the creek at this bridge, and pedestrians passing over it at almost any time of the year would be able to peer over the edge and get an insight into the less attractive aspects of our culture, as we’ve pointed out before. 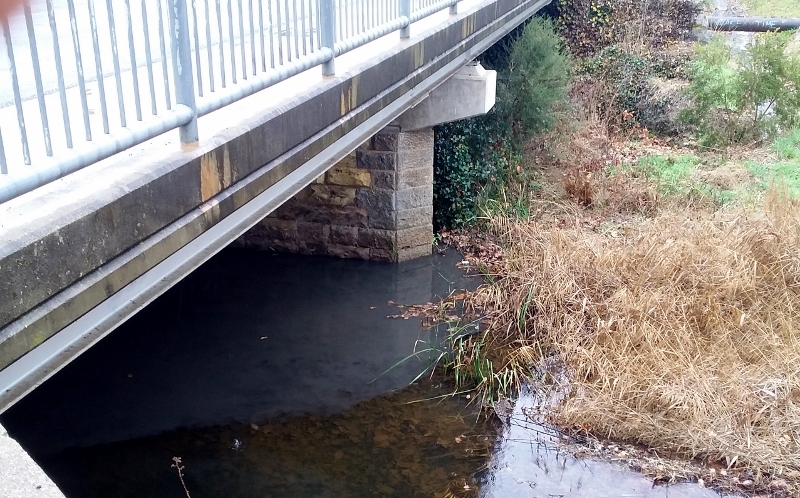 The grey flow coming down the Wheeler Street gutter contrasts with the relatively clear water coming down Forest Creek. The great Australian tradition: pour it down the creek, and it will go away…

This discolouration is a bit different from your normal junk, though. It looks like construction waste, and it’s a reminder that there’s a great Australian tradition we could do without: treating our creeks as drains carrying the debris of our industrial system out of sight. That grey colour puts the observer in mind of…that’s right: sludge.

Sludge: a toxic mix of ‘thick, semi-liquid slurry of sand, clay, gravel and water that flowed out of mining operations.’

Readers of one of last year’s horror publications, Sludge—disaster on Victoria’s goldfields (Latrobe Uni Press and Black Inc) will know that throughout the second half of the 19th century mining sludge in terrifying volumes was dumped into our waterways. In fact, the embankments at that point in Forest Creek were built in 1860 to divert sludge from mining works  away from the town of Castlemaine. Those walls have a kind of charm nowadays, but we shouldn’t forget that they were built to turn the creek into a  drain.

FOBIF recommends Sludge as a good read for Coronavirus times. It’s not exactly joyous reading, but it’s a handy reminder of times when there was virtually no restraint on industry’s tendency to trash the environment, when protests by farmers and citizens against the destruction of our waterways were powerless against mining interests. Those were the days when ‘cows wandering down to drink at Campbells creek in Castlemaine routinely got bogged and half drowned (in sludge)’; when Laanecoorie lost half its capacity in its first 40 years, silted up with sludge; when sand slugs clogged up the Loddon at Newstead, reducing its capacity to form deep pools (they’re still there). Levee banks five feet high were powerless to protect farmland against the flow. The situation was in some ways bizarre: a bloke at Fryerstown got a permit to withdraw 68 million litres of water a day from the Loddon—twice its actual flow!

These are practices we’re still paying for, as the book points out. It’s handy to keep that in mind when people complain about ‘green tape.’