The following is an excerpt from the Friends of Kalimna Park June newsletter:

‘Friends of Kalimna Park and other environmentalists had discussions with Forest Fire Management Vic (FFMV) leading up to the recent Planned Burn in the Park. Our focus was on protecting Eltham Copper Butterfly habitat and populations, and preventing the loss of substantial trees which take so long to grow here. FFMV agreed to exclude some areas where there are numerous ECB and to rake around tree bases to avoid fire getting into them.

‘There is ongoing concern from our point of view at the intrusive nature of the earth breaks created — vehicle tracks, deep soil removal on foot tracks and around trees. These are considered necessary partly for crew safety. However, we feel that smaller scale localised fuel reduction over time should be possible with the right resources.

‘We were pleased to see that FFMV has set up numerous monitoring points in the Park, with permanent markers, to study the impacts of burning. They have recorded the present flora conditions at the sites. They also did their own ECB survey using the bursaria grid map.’ 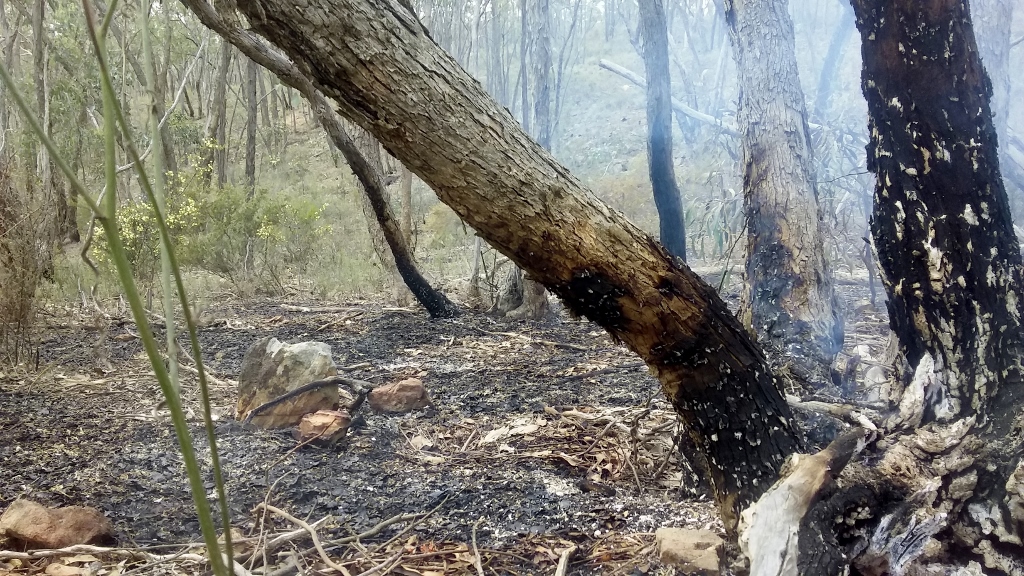 In the Kalimna Park burn zone, April 2020. The fire appeared to have uneven coverage, but we are not aware of official estimates as to its effectiveness as fuel reduction or its environmental impact.

The April fire appeared to achieve limited coverage. FOBIF has not had any official statement from the Department as to its effect as fuel reduction or its ecological impact.