Community responses have revealed an ‘overwhelming preference’ the third of the three options canvassed in DELWP’s online fire consultation. This option proposes ‘less planned burning across the entire landscape’ than the others. It also aims for fuel management exercises to be conducted ‘in areas where they achieve the best outcome for bushfire risk reduction’. 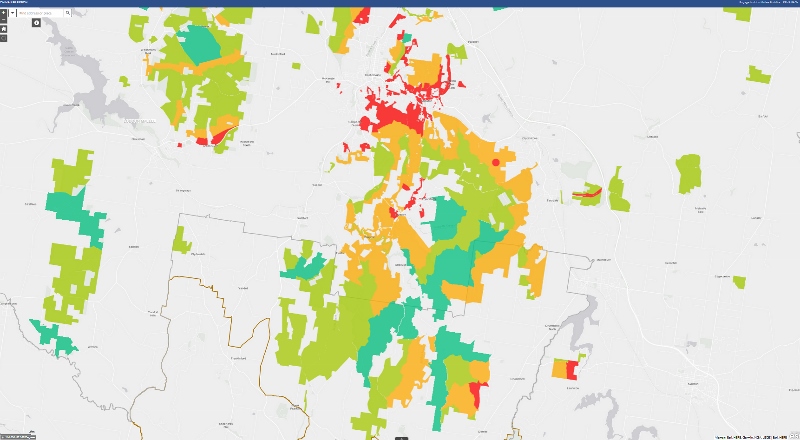 Map shows the proposed approach to fuel reduction in our region. Red is most severe (seen around Castlemaine and Chewton, for example); aqua is exclusion of burns. More detail can be got from the interactive map–which has Maldon in it!

The community preference is revealed in the latest chapter of DELWP’s Engage Victoria consultation on fire. It can be found here. There’s an interactive map, which clarifies what the proposed strategy might mean on the ground. It shows that fuel reduction would be concentrated heavily around population centres, and that there would be extensive areas where there would be no ‘planned burning’.

The result so far reflects a common sense preference for targeted action on fuel, as opposed to the scorched earth approach pursued under the unlamented five per cent target strategy. In fact, it’s very similar to the recommendations of the Royal Commission Implementation Monitor, Neil Comrie.

DELWP is asking for feedback on the strategy, in the form of a short questionnaire. So far this consultation has concentrated on fuel reduction.  The questionnaire does open discussion on prevention, among other things. Given that nearly 80% of fires are caused by human ignorance, carelessness or arson, it might be about time to take this one on.

We recommend you have a go at the questionnaire. It’s open till August 12–next Monday!

2 Responses to Fire: an ‘overwhelming preference’?