Kick up the dust! Churn up the creek! You have the right!

In 2012 a British think tank estimated that ‘for every pound made by advertising executives, they destroy an equivalent of £7 in the form of stress, overconsumption, pollution and debt; conversely, each pound paid to a trash collector creates an equivalent of £12 in terms of health and sustainability.’

So says Rutger Bregman in his book, Utopia for realists [2017]. We can’t verify this, but we find it strangely plausible. Who hasn’t winced at some commercial being yelled from the radio? The amount of mental damage inflicted by some of these ads must be enormous.

Here’s an example, in the form of a question:

Should drivers be forced to drive on roads? Or should they have the right to drive wherever they like? 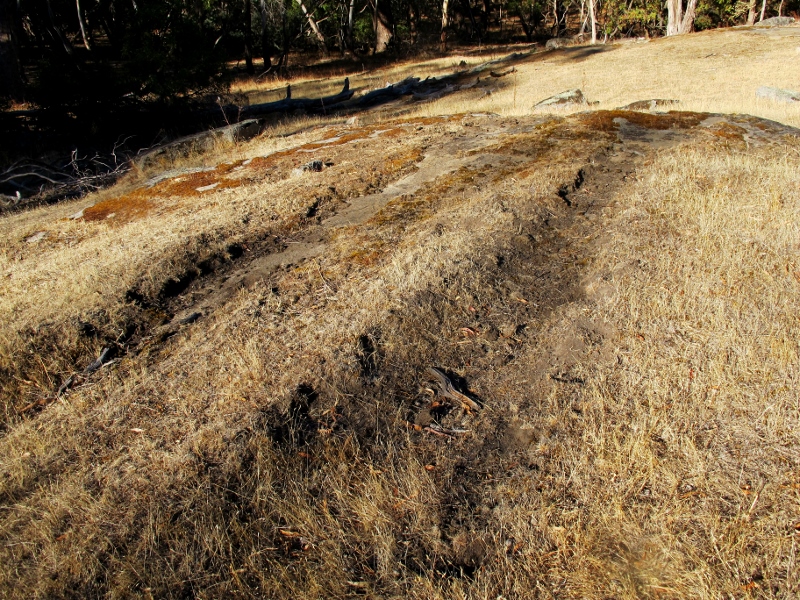 These seem like pretty weird questions: of course you should drive on a road. People don’t drive into the Botanical Gardens, up to the edge of the lake. They know there are limits.

But the bush is different. Opponents of the recent VEAC recommendations on the Wombat and Wellsford forests complained that if these places were national parks, they would have to drive on roads, an infringement of their traditional rights. Apparently they don’t realise that the law on this matter is the same on all public land.

Some drivers of SUVs, and riders of motor bikes, believe that these machines have the right to go anywhere. Earlier this year, believe it or not, Coliban Water had to appeal to motorists not to drive into the Malmsbury reservoir!  Cars have been driven across moss beds on Mount Alexander, and when Parks Victoria blocked a very small section of road near Lang’s Lookout, the rock barriers were furiously graffitied  by drivers who didn’t want to walk an extra 100 metres…

Where does this weird mindset come from? If you want to know,  just watch a few sporting events on television, and be amazed at the commercials promoting off road vehicles. Almost without exception they show vehicles plunging through creeks, churning up dust, even driving in the sea. Most of the driving is irresponsible, some of it dangerous, some of it silly [driving in salt water’s not great for the car].

Given that SUVs spend most of their time on the school run, or to the coffee shop, what’s the point of this publicity?

It seems that ‘Advertisers like to push your hot buttons. One of them is your attraction to nature. Car companies use our love of the great outdoors to sell some of the most gas-guzzling and polluting vehicles around.’ How about that for irony?

And here’s a sad footnote: in 1977 a Federal Parliamentary enquiry in Australia looked into the matter of off road vehicles and their increasing impact on the environment. It concluded, among other things:

‘–articles and programs about ORVs should project an environmentally responsible attitude towards their use and that the Australian Press Council should take note of this conclusion.

‘–manufacturers, distributors and advertisers have a responsibility to ensure that their advertising material does not depict off-road vehicles damaging the environment or in any other way encourage irresponsible use of ORVs and that the Australian Association of National Advertisers should take note of this conclusion.’

FOBIF’s arithmetic has been wobbly of late, but we’re pretty sure that was 41 years ago. Readers can judge just how effective those recommendations have been.

1 Response to Kick up the dust! Churn up the creek! You have the right!