Let’s go and tear up some country, fellas

There’s something very striking about advertisements for SUV’s: almost every one contains an image of a car either tearing up some country, plunging through a waterway, or driving along a remote beach. TV advertisements of these cars will sometimes do all three, as watchers of sporting broadcasts can attest.

The gist of this quite substantial propaganda barrage is: ‘go for it, rip up the country, that’s what these machines are for.’ There might be an additional message: ‘be a man: show the country who’s boss.’ We’re not sure about that one. 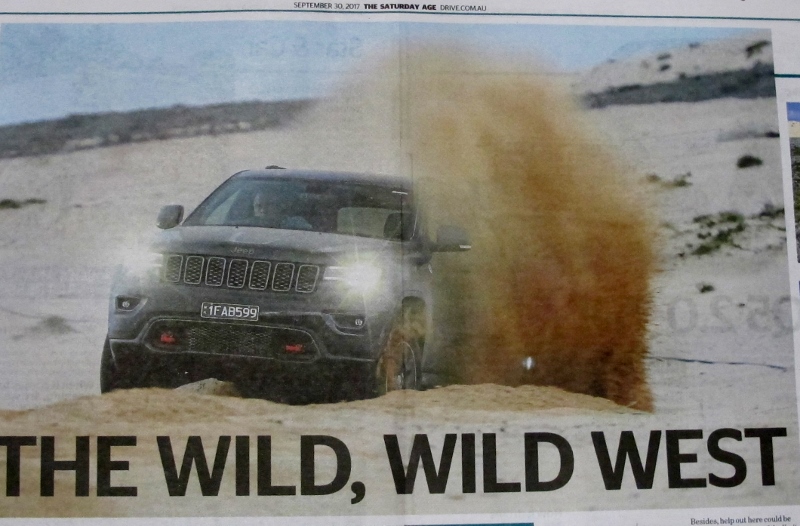 Isn’t it great tearing up the country? Illustration of a ‘review’ of Jeep Cherokee in the Age, which should know better.

This is just hoon behaviour, and most 4WD drivers don’t go for it, fortunately. In fact, the Code of Conduct of 4WD Australia includes the following:

‘1. Obey the laws and regulations for Recreational Vehicles that apply to public lands.
‘2. Respect the cultural, heritage and environmental values of public/private land,
by obeying restrictions that may apply.
‘3. Respect our flora and fauna. Stop and look, but never disturb…
‘7. Adopt minimal impact camping and driving practices.’

There are enough drivers around, however, who seem to think that ripping the country apart is what life is all about, and it’s a pity that they should be getting as much encouragement as they are. The results can be seen all over the country, and the photo below is a sample. 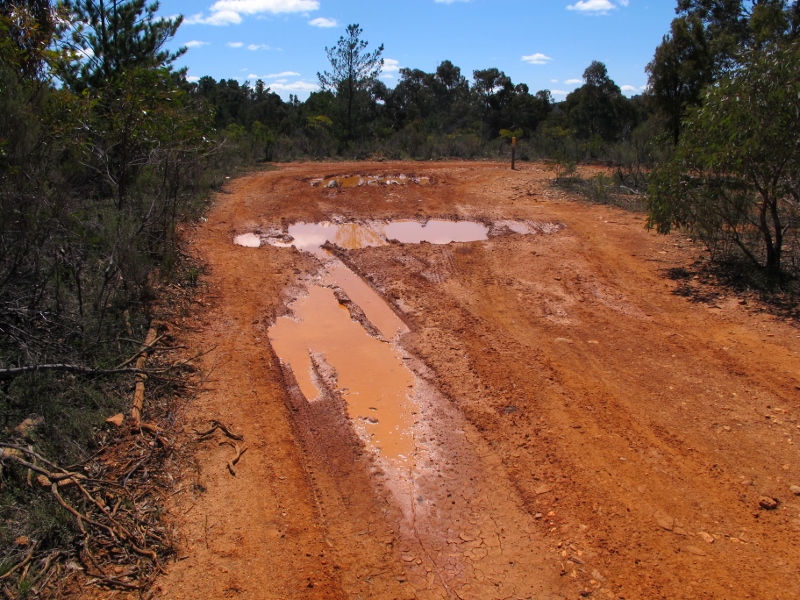 Section of the Goldfields Track near Irishtown, October 2: this kind of destruction is the direct consequence of irresponsible advertising of recreational vehicles.

Most drivers don’t behave like this, and it’s about time the industry and its publicists grew up and stopped promoting hoon behaviour.

Here’s a curious footnote, in this letter to the August issue of the RACV RoyalAuto magazine, and the editor’s response, under the heading, ‘Keep off the beach’:

‘Your writer recently visited Kangaroo Island with his 4WD and left an intrusive footprint on the formerly pristine Snellings Beach (“The Other Kangaroo Island,” R A July). Snellings is a small beach that can be walked in a few minutes. This allows you to experience how nature does perfection. A bonus is that pedestrians might see the rare hooded plover eggs and the birds get a chance of survival. We have roads for cars, beaches are for the creatures that depend on them. It is a privilege for humans to enjoy them.

Editor’s note: The online version of the story has been modified to include our apology and to take out reference to driving on the beach.’

Out of curiosity, we just checked the online version of the July RA. The offending article doesn’t seem to be modified at all. It’s headed by a large photo of a  beach, a car parked in the foreground, and numerous tyre marks on the sand. The text reads, in part, ‘Within minutes we’d driven down onto the beach ourselves, our 4×4 rolling confidently over the firmly packed sand. Maybe five other people were scattered along Snelling’s pristine length. We’d found the other Kangaroo Island.’

Not so ‘pristine’ now, maybe. We’ve contacted the editors of Royalauto for a clarification. Oh, and we couldn’t find the apology, either. On the other hand, it’s not easy to find things in online versions of magazines.

2 Responses to Let’s go and tear up some country, fellas