The site of the 1851 Monster Meeting near the junction of Golden Point Road and the Pyrenees Highway has been placed on the state heritage register. The Monster Meeting is recognised as the first time workers had stood united in protest against the government. This meeting was the precursor to the Red Ribbon Rebellion (1853) and the Eureka Stockade (1854) which led to the introduction of the more democratic Miners Right. 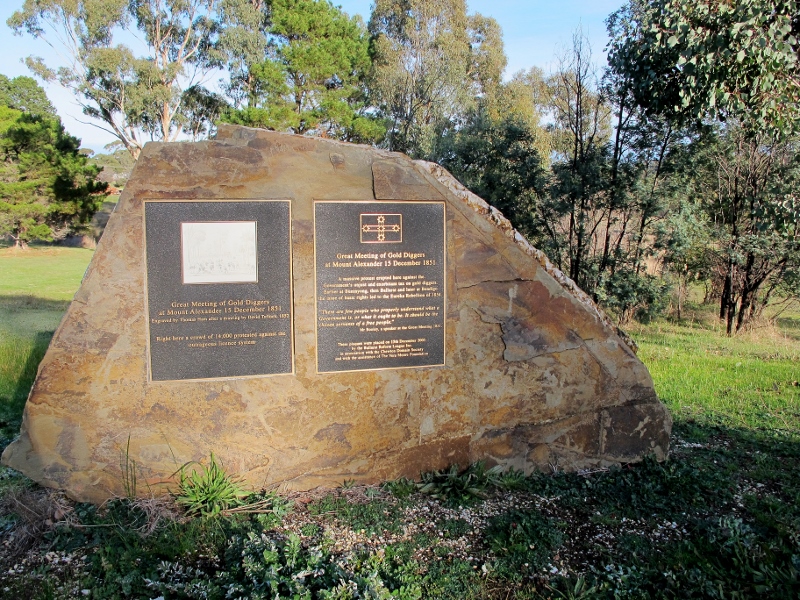 ‘There are few people who properly understand what a government is, or what it ought to be. It should be the chosen servants of a free people.’ [Mr Booley, a speaker at the Monster Meeting, 1851]

Late FOBIF President Doug Ralph was a leading campaigner for the recognition of the importance of this protest, and it was a nice touch that the declaration was made on his birthday. Doug was adamant that concern for the environment did not preclude due respect for cultural history.

The monster meeting was notable for the eloquence of the speakers, and for its forceful yet peaceful conduct. In that sense the metal statue on the highway nearby is quite misleading in representing a miner brandishing a gun.

The exact site of the meeting is difficult to determine with certainty. The Heritage Committee decided that ‘by reference to comparative analysis of the documentary sources available, the recommended extent of registration includes the most likely location of the Shepherd’s hut, the most likely location of the dray which stood nearby and upon which speakers stood, and, on the evidence, enough land to accommodate the approximately 10,000 to 15,000 diggers who gathered on 15 December 1851 for the monster meeting…the Committee is confident that the land of the proposed registration includes the epicentre of the Monster Meeting site…’