The proposed levee plan is the result of consultations on the 2015 Flood Management plan. This extensive document can be found here. It arose out of the 2011 floods, said to be a one in a hundred year event, and has been modified after consultation. 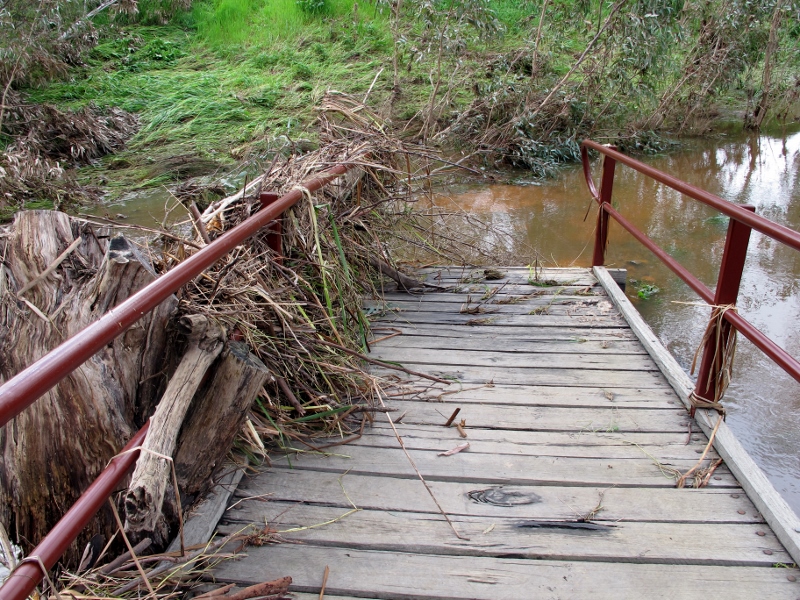 Campbells Creek footbridge, September 2016. Under current proposals, footbridges over the creek will not have railings: flood debris will be able to float over them.

The proposed levees are designed to resist one in twenty or one in a hundred year floods, depending on the location.

The 2015 plan’s proposal to build a 2 metre high levee along the creek opposite the Railway Hotel has been abandoned after strong community opposition. The current plan proposes a one metre high levee.

The proposals, which are estimated to cost $3.5 million dollars, have not so far been subjected to a cost benefit analysis. One third of the cost would be borne by Council.

One interesting feature of the various reports on the floods is that they demolished the idea, circulated at the time, that Landcare plantings had worsened the problem. A flood model was used ‘to test the effects of removing vegetation from the waterways. This resulted in marginally lower flood levels in the creeks but not significantly enough to prevent over-floor flooding to affected properties.’

It is significant that proposed works deal with the ‘Castlemaine-Campbells Creek flood plain’: in other words, authorities are dealing with the brute fact that past planning decisions have allowed building on that flood plain, with all the resultant problems.