Floods: running to the past

Recent heavy rains in Victoria have brought about a return of calls to strip vegetation from waterways as a way of reducing flood levels.

The claim that vegetation along waterways raises water levels was raised last year when some locals blamed landcare plantings for flooding in Castlemaine. At the time FOBIF pointed out that creeks and streams had been stripped of vegetation for many years up to the 1990s. This practice had not solved the flood problems but had produced a few of its own, including, predictably, erosion of stream banks. It’s worth remembering that the shocking floods in the past came along streams entirely stripped of vegetation—the catastrophic 1889 event being the most infamous.

In our post we quoted Australian Land and Water research which showed that ‘Adding or removing large wood (snags) in streams has little effect on the height and duration of large floods.’ This is the consensus opinion of those who have looked seriously at the flood problem, but it has not stopped the State government from announcing that it would consider going back to the practice of ‘desnagging’ streams. It’s hard to believe that the government will proceed with a practice which so obviously failed, but we’ll have to wait and see.

In the meantime the Midland Express carried a front page article with photo on March 6 showing Nationals MP Damien Drum with a local businessman examining vegetation which allegedly raised flood levels in the previous week. FOBIF members have been down to look at the site in question. There is debris in the creek at the point in question, but in our opinion there is no case for wholesale vegetation removal [see picture]. At that point Campbells Creek does a sharpish left turn which would cause some banking of water, but the creek itself was not seriously blocked. 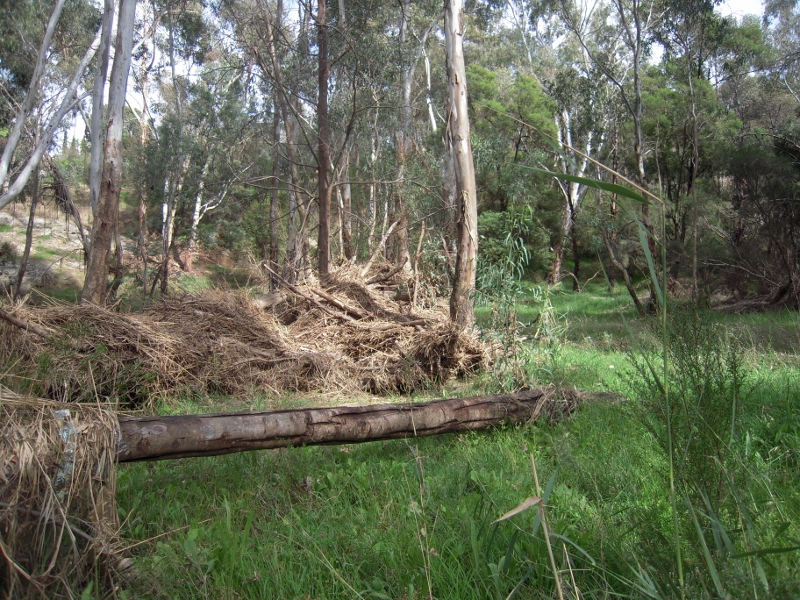 Campbell's Creek near Gaulton St, March 14 2012. FOBIF believes that there is a case for vegetation management in town creeks, but that wholesale removal of native vegetation is a policy proven to have failed in the past.

There is a case for removing vegetation which clearly chokes streams—willows being a prime villain in this respect, and the CMA has been busy in Campbell’s Creek doing just that. It is also obvious that some measures should be taken to protect buildings which past planning mistakes have allowed to be built under flood levels—and that Council should vigorously resist future attempts to build on flood  prone land. For this to happen we would need precise flood mapping–and, amazingly given the number of floods we’ve had over the last hundred and twenty years, that doesn’t seem to be available.