Despite the unseasonably warm weather a small but select group of nine kicked off the 2017 walks season by visiting Mt Alexander.

Starting from Coopers Lane we climbed to Roxanne Pass, then off track we contoured above Laytons Quarry and up to Harcourt Granite.

Golden Orb and Jewel spiders were out in force and we tried to avoid damaging their webs. There were also lengthy debates trying to identify individual trees, eventually the Eucalyptus Guide was produced and a consensus reached.

Lunch was had in a shady spot on West Spur near the lookout before heading down this very attractive spur and back to the cars.

Lionel and Barb always produce a really good walk and this was no exception. 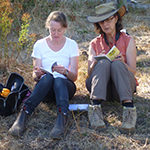 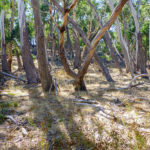 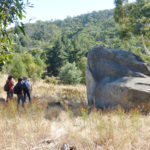 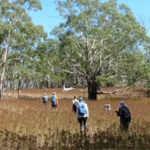 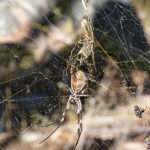 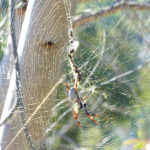 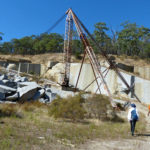 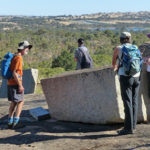 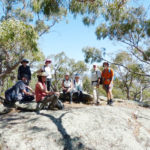 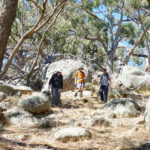 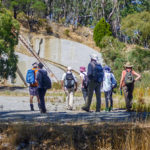 Noel Young sent us a further report on the walk which includes a list of birds observed:

Nine walkers braved the heat to walk the north-west slopes of the mount, ably led by Lionel and Barbara. Passing by Target Rock, we climbed to the ridge through many large and impressive Eucalypts, and in the more open areas, carpets of the exotic weed St. John’s Wort, which favours granite soils and which unfortunately is prevalent on Mt. Alexander. Also prevalent at this time of year were many Golden Orb-weavers, which sit on large webs waiting for prey, and fertilisation by the tiny male, which is sometimes mistaken for a meal.

Our route took in two of the abandoned granite quarries, one on the lower slope and the other near the top of the ridge, displaying very large unbroken slabs of grey ‘Harcourt granodiorite’

Next month’s walk  on 16 April is around town with geologist Clive Willman.

This entry was posted in Nature Observations, News, Walks, Weeds. Bookmark the permalink.