The beetle below is quite famous, and worth considering for a few reasons. One is that it’s a handsome creature. Another is that it’s played a modest role in the history of science. It’s a Botany Bay Weevil [aka Diamond Weevil, aka Diamond Beetle]: this was the first Australian insect named for European Science, from a specimen collected by Joseph Banks and Daniel Solander on Cook’s 1770 voyage along the east coast. For that reason alone it’s a link to a very different Australia from the one we live in now.

The species lives in a variety of wattles. The specimen below was found on a wattle planted by Castlemaine Landcare along Forest Creek—and that’s a third reason to celebrate the beetle: the gold rushes stripped the creek bare, and Landcare revegetation has brought back a link to that distant past. 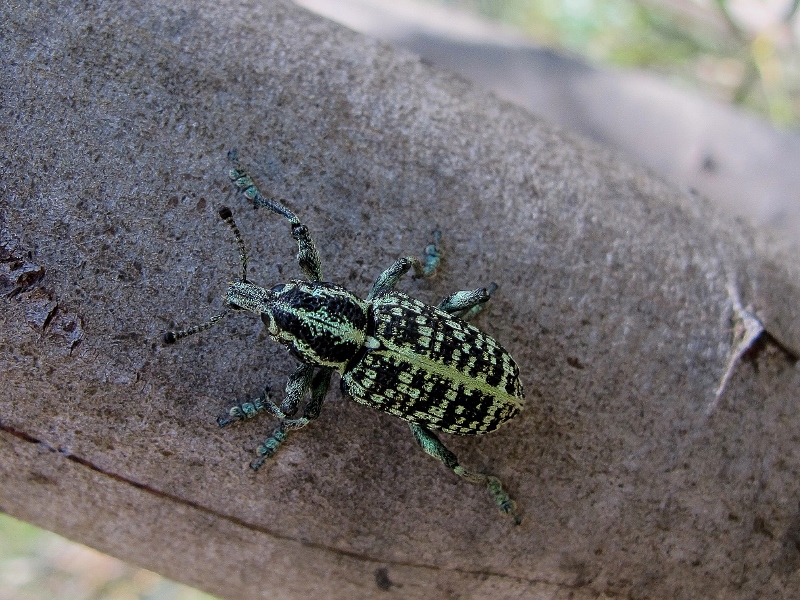 Diamond Weevil [Chrysolopus spectabilis] on a branch of a Wirilda wattle [Acacia provincialis], Forest Creek, December 29 2016: a creature which is a link to a distant, and not so distant past. It’s found widely in south eastern Australia, from SA to central north Queensland.

Crudely speaking, a weevil is a beetle with an extended snout. Beetles account for about 40% of  known insects, and more than a quarter of all animal life. Oh: and they’ve been around for about 300 million years…which puts 1770 into some perspective.