There are two basic truths about weeds. First, they’re often pretty [and maybe even useful in some way], and second, they’re bullies that shoulder aside other plant species to create boring monocultures.

Both things are true of St John’s Wort, introduced into Australia in the 1870s as a garden plant, and already a problem by the end of the 19th century. The plant infests thousands of hectares in south  eastern Australia, both farmland and bush. 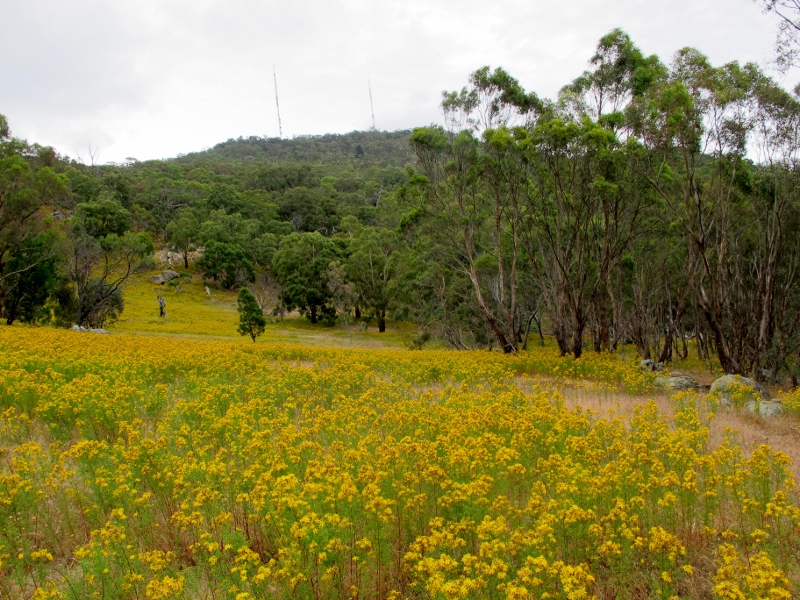 St John’s Wort near Aqueduct Creek, Mount Alexander, December 14 2016: like all weeds, it has a sinister prettiness.

The weed is currently in spectacular flower on Mount Alexander. It’s pretty clear that the only effective method of control is going to be biological. Many attempts at this have been made since the 1930s in Australia [including one on Mount Alexander], but the plant still flourishes. As far as we know there is no control program on the Mount at the moment.

A case for more research and active attack on  this and other weeds is pretty obvious. Curiously, every time we’ve been informed of cutbacks to land management agencies in the last ten years, we’ve been assured that no ‘front line’ staff are affected. The supposedly unimportant staff disposed of are often doing important research work which would eventually save ‘front line’ staff a lot of trouble. The result, in the reduced capacity of agencies to tackle the large problems, is clear from the photo above.