FOBIF’s field guide to the eucalypts of the Mount Alexander Region has sold out its print run of 800 copies in two months, and a reprint edition is now available.

The reprint contains some minor changes, but the most significant addition to it is a dedication to its co-author, Ern Perkins, who died in early November.  The dedication reads

This book is dedicated to the memory of Ern Perkins
teacher, botanist, field naturalist
(1934-2016)

Ern was a great supporter of the eucalypt project from the beginning. Without his knowledge of the genus, and his amazing familiarity with the location of different species in different corners of the region, the book would never have been finished. He overcame serious health problems to come on numerous excursions around the district in search of good tree specimens, and his enthusiasm and good humour never failed him.

Ern’s contributions to the understanding of the natural history of the region were numerous. He was an inspiration to many in the district, and we urge any who have not already done so to read Chris Timewell’s obituary for him (and related links) on the Connecting Country website. 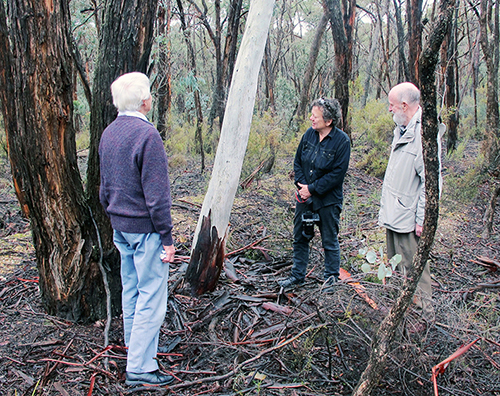 Ern and Lesley Perkins checking out a Candlebark with Bronwyn Silver at Green Gully, Winter 2016