What do we know about all these burns?

Two of the terms of reference of the current enquiry [see above] relate to the environment. It’s fair to say that a recurring question–probably since Black Friday in 1939–is, how much fire can our environment stand before it starts turning into a desert? Proponents of maximum burning regimes don’t seem bothered by this question. We believe it’s central to the whole question of bushfire management. What’s the point of making ourselves safe if we end up living in a dust bowl?

For that reason it’s important to keep an eye on the long term effects of all Department burns. We believe that too little is known about this, and that many of the exercises previously known as ‘ecological burns’ had an element of farce: it has been virtually impossible to get any specific information from managers about the ecological point of the exercise. 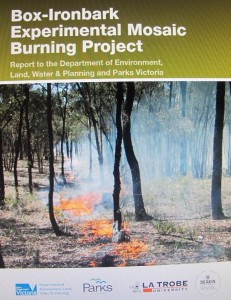 So the publication of the findings of the Department’s Box-Ironbark Experimental Mosaic Burning Project is important. This 42 page document is packed with interesting info about the effects of fire on the environment, a lot of it confirming anecdotal evidence: for example,

–frequency of burning is critical: the more frequent the burn, the more destructive the effect. As we’ve noted in the past, fire managers have been used to treating asset protection zones as ecological sacrifice areas: the ecology has been slowly destroyed to protect human safety.

–the larger the fire area, the more radical is the effect on the forest structure.

–bushfires of natural origin in this region are rare: most fires are lit by people. Readers will remember the startling statistic in the Mount Alexander Shire’s Municipal fire plan: historically there have been 53 fires per year on average in this region: of these, only 6, on average, have been ‘natural’ [ie, resulting from lightning strikes]. The rest have been caused by carelessness, technical malfunctions or arson.

There’s an important qualification to all this: the project ran for three years only–far too short a time to reliably decide on the long term effects of fire, especially since the three year period was  wetter than average. The report makes it quite clear that further monitoring of the effects of fire is vital. Will that monitoring happen? We’ll see. And there’s a further point: over the years the Department has produced numerous reports on the ecological effects of fire. You’d have to say that the knowledge buried in these reports has not always been heeded by fire managers too often driven by targets which give no importance to the environment.