On Tuesday May 24 DELWP held an information session in Bendigo on future fire plans for the region, including draft maps showing possible new fuel reduction zones under the risk management system. A similar session will be held in Castlemaine this coming Wednesday June 1st at the Ray Bradfield Rooms, from 2pm to 7pm: drop in between those times to talk to fire officers.

DELWP is now in the process of developing a fuel management and fire protection system based on actual risk, rather than the previous policy of burning a quantity of hectares each year, regardless of the actual effect of such burns.

Matters of interest to FOBIF in the newly developing system include: 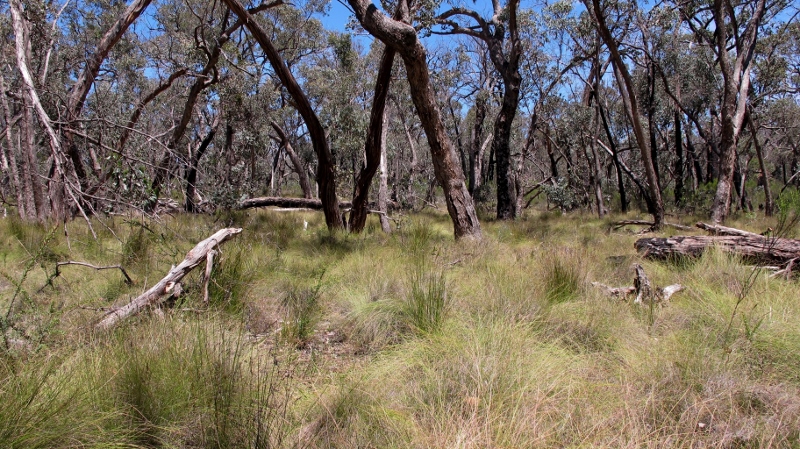 Near Porcupine Ridge, in a new fire zone proposed under the risk management system. DELWP is rethinking its fuel reduction strategy, and info on the new system will be available at a public consultation in Castlemaine on Thursday.

–it seems that under the new system the area of public land burned by DELWP in the goldfields will be cut by as much as 50%. This is good news, but casts a strange light back over the last few years. You’d have to conclude from this reduction that some of the burning which has been going on in this region for the last few years was not actually needed either for ecological or safety reasons.

–a  new proposed fuel management zone has been drawn on the map running north-south down  the length of the east side of the Porcupine Ridge road from near Vaughan Springs down towards Mount Franklin. The zone is in the Castlemaine Diggings NHP, and includes areas of great interest to FOBIF, like parts of the Wewak track, Browns Gully and Middleton Creek. We’ll express an opinion on this when we see the idea finalised and its logic explained.

–managers told FOBIF representatives at the briefing that there are areas in our region where, from a safety  point of view, it is far more effective to reduce fuel on private than on public land. However, the idea of incorporating private land into fire protection schemes is still undeveloped, and it seems that quite a bit of discussion and negotiation needs to take place before a coherent approach to it is developed.

–fire managers are still having to deal with contradictory demands from the public, with some community members demanding more management fire, and some less: there is still a lot of public debate to take place, and research and information to be communicated, before a proper community consensus on fire management can be obtained.