The times really are changing

The Friends of the Earth have produced a paper discussing how climate change will affect the Loddon Mallee region of northern Victoria. The material in it mostly won’t be new to our readers, but it’s worth a look, all the same. 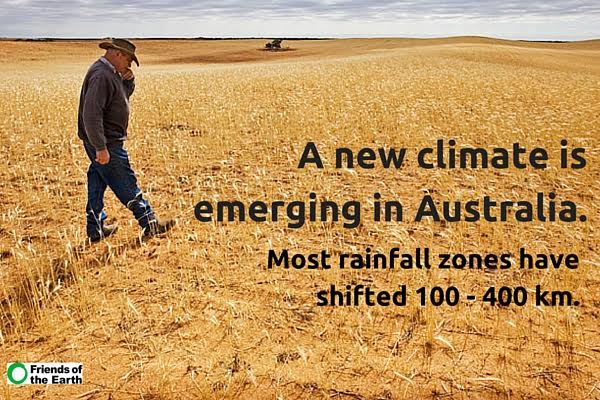 Among other things, the report notes that

‘According to research from the Australian Export Grains Innovation Centre (AEGIC) (2) we are already experiencing a ‘new climate’, one that has become noticeable since about 2000.

‘The AEGIC analysis, based on rain records since 2000, shows rainfall zones have moved — in some cases up to 400 kilometres. Parts of the Mallee, North Central and Riverina are now designated as being ‘uniform’ rainfall zones, where rain is equally distributed over summer and winter seasons. This has significant implications for cropping in the region, which has traditionally relied on a winter rainfall pattern.’

Rainfall is predicted to drop in our region by 2.5% by 2030, and temperatures to rise by almost a degree.

These changes have implications for agriculture, tourism [blue green algae’s not a great drawcard for visitors], water supply for communities, and our struggling bushlands.

The FOE paper is going to be used in the Bendigo electorate during the federal election campaign. It can be found here.