Fire: it’s not just a matter of fuel reduction

Fire officers met the public in a lengthy consultation session on the draft Fire Operations Plan [FOP] through the afternoon and evening of last Tuesday [August 11] in Bendigo.

An excellent link to the relevant documents with comments on the FOP in the Muckleford-Maldon area can be found in the Muckleford Forest Blog. In addition to burns discussed there, FOBIF is most interested in proposed burns in the Taradale, Tarilta and Fryerstown areas. 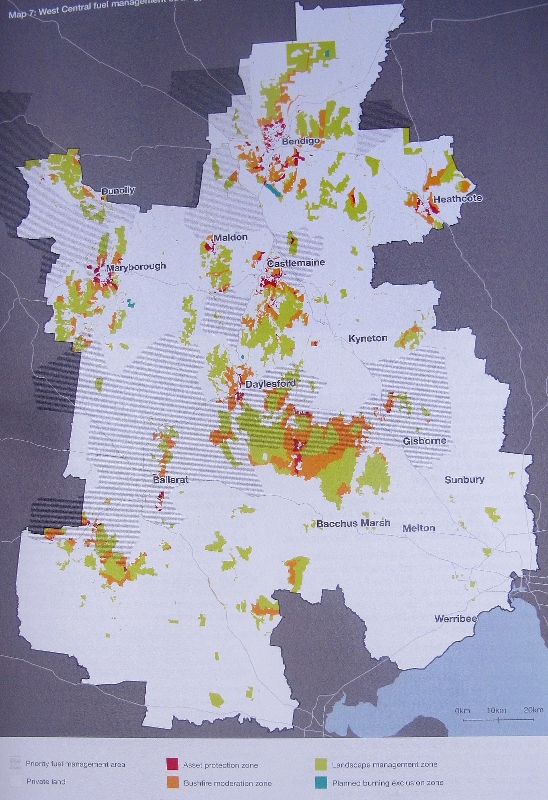 We’ve reprinted this map before, but think it’s worth another look: the ‘priority fuel management areas are in mid grey, and they’re on private land. It’s not clear how they relate to ‘asset protection’ zones near settlements. Source: Strategic bushfire management plan, West Central bushfire risk landscape.

Aninteresting feature of the consultation was the display of Risk Landscape material. Readers will remember that this is the system most likely to replace the current crude five per cent burning target.

It was clear from discussions with officers that as far as on ground work is concerned, it’s early days with this system. For example: as is clear from the map above, most of the ‘priority fuel load’ areas in our region are on private land: yet we were told on Tuesday that negotiations via the CFA and municipal councils to undertake systematic fuel reductions in these areas are not far advanced: and that nothing had yet taken place on the ground in the Mount Alexander shire.

The IGEM report on fuel management was clear that a major effort needs to be made to explain to the public exactly what is required in this area. Apart from the individual responsibilities urged under the ‘prepare/act/survive’ formula, we have been sold the line that bushfire safety can be achieved by subduing the bush–sometimes to extinction. Now fire managers have to work on a harder job: to convince the public that fire is a total community responsibility. And as we said last year:

‘The risk landscape document] largely confines its consideration of risk to the matter of fuel and fuel management. On page 31 of a 33 page document we’re told that fuel management is ‘only one of a range of approaches to reduce bushfire risk on public land.’ The others include prevention, preparation, response and recovery.

‘You’d think the first of these [‘prevention, to minimise the occurrence of bushfires, particularly those started by people’] would be a high priority, given that most fires are started by people [in the Mount Alexander shire there are an average of 53 fires a year, and only 6 of these are naturally occurring. 42% of fires dealt with by DEPI since 1972 have been accidents, 35% were deliberate, and 17% ‘unknown or other causes’]. It will be dealt with ‘over the next few years’. In the mean time we have a range of advertising and punitive measures with a limited success record. Priority is given to fuel, and the community is given to understand that its management is the main way to reduce risk.

‘You’d also think that a major risk is housing in dangerous areas. This is referred to in passing on page 16, then forgotten.’ On Tuesday, officers lamented that housing had in the past been allowed in areas where it would no longer be permitted. Given the way developments are pursued, we’re not sure of that one.

FOBIF will be making a submission to the latest Fire Operations Plan in the next few weeks.