The scalping of Fryers Ridge [1]

Visitors to the Fryers Ridge this past week have been stunned to find that major works on the verges of the Ridge Road have scoured the earth bare, virtually eradicating a large part of one of the region’s most significant wildflower areas.

The road runs along the top of the ridge, dividing the Fryers Flora reserve from the State Forest.

The works have been designed to eliminate blind bends, and facilitate access in the event of fire: according to DELWP: ‘the works were completed by the Department tractor …to clear the road verges of vegetation as a recent roads inspection showed that the verges were overgrown and had a traffic near miss a while ago.’ 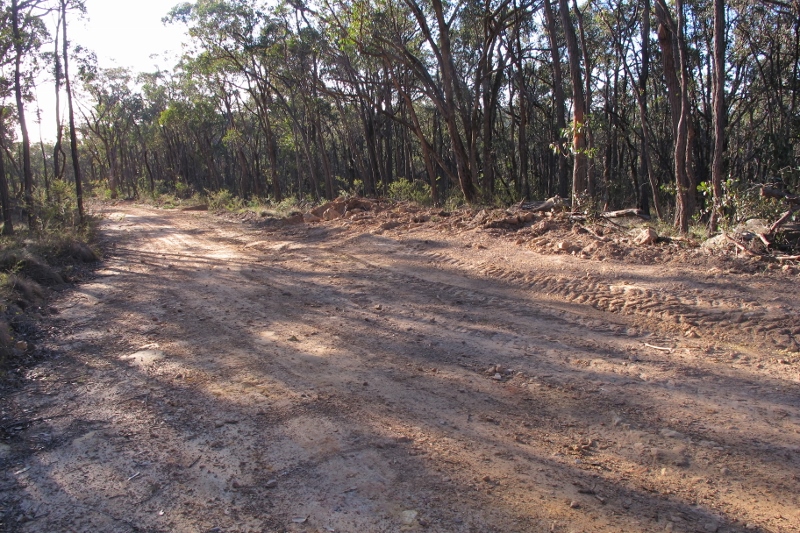 Fryers Ridge Road, near the Irishtown Track, July 6: in places the road is wider than the Midland Highway

The roadside verge has been ‘scalped’ along many hundreds of metres, and in addition earth has been scraped and piled up as much as 10 metres into the bush.

These works are a perfect example of a problem FOBIF has had with DELWP managers for many years.

In discussion with Department and Parks officers on the road on Friday July 10th we were amazed to discover that they did not attach any particular importance to these roadside verges,   because no rare or endangered species had been drawn to their attention there. It seems the area is in a ‘general zone’, which seems to translate as ‘nothing much to see here.’ 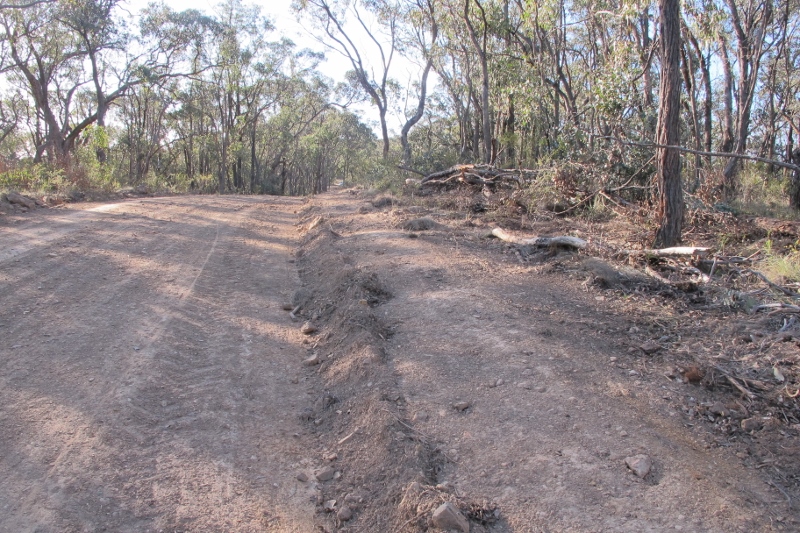 On Fryers Ridge: for long sections vegetation off the edges of the roadway has been obliterated over hundreds of metres

This is the problem with most road works: for example, a 2012 DSE Document on roadside vegetation management for bushfire risk mitigation states that ‘Bushfire risk mitigation works that are likely to have a significant environmental impact on the road reserve will require a planning permit.’ If the area in question is not seen by managers as special, and is not on their data bases as containing rare species, it seems that road workers aren’t instructed to be particularly careful to look after the area: works are not seen to have a ‘significant environmental impact.’

It seems to us that there’s an underlying assumption in the Department that whatever mess is made in the short term will fix itself in the longer term, because the bush recovers. We were told this in our discussions with managers on Friday: this kind of gouging had been done before, and the bush had come back OK…it may even be improved by this kind of disturbance…so it’s not so bad, is it? Our opinion is that whatever values such areas as this have are there in spite of such works, and every time they are done, especially, say, in drought times, the recovery is less. Here’s a question: Has the Department made any long term assessment of the effects of these kind of works?

1 Response to The scalping of Fryers Ridge [1]