Golden Orb Weavers are about

The Golden Orb Weaver Nephila edulis is reasonable common in our local bush. At this time of year the females are mature and able to construct large wheel-shaped orb webs. In certain lights these strong webs look golden, thus the name. Their egg sacs are also golden.

The Orb Weaver below was one of two that had joined forces to build a complex web stretching across the track in the Walmer South Nature Conservation Reserve. The web which had been there for over a week was nowhere to be seen the morning after the recent thunderstorm (15 February). Orb Weaver webs are semi-permanent and repairs and adjustments are common so it may reappear. 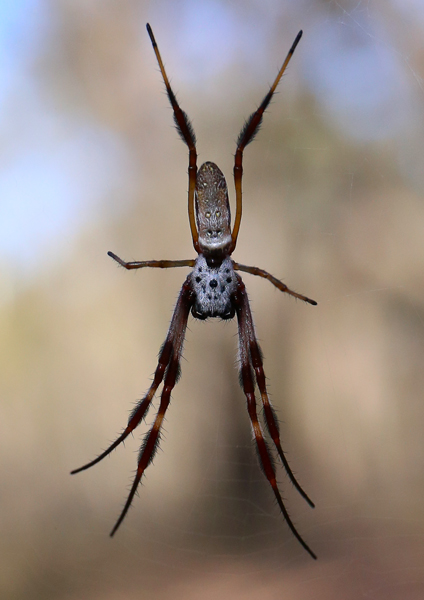 There are some interesting photos of Golden Orb Weavers including one of mating – the male is tiny compared to the female – and one of a bird caught in a Orb Weaver web on a wonderfully informative site that has been developed by Robert Whyte and Dr Greg Anderson. The site serves as a working draft of forthcoming CSIRO publication, A Field Guide to Spiders of Australia. You can also find out more about these spiders and others on the Victoria Museum website.