Election brochures are starting to appear in letter boxes and we’ll be taking a brief look at the ones that come our  way.  First up is the Liberal-National Coalition: we have three of their brochures directed at Bendigo region electors.

Not one of them mentions the environment, although this features in recent polls as more important to electors than two of the ones they do promote prominently– roads and law and order. No mention of water, either; or agriculture. Their absence suggests where these issues rest in the government’s priorities. 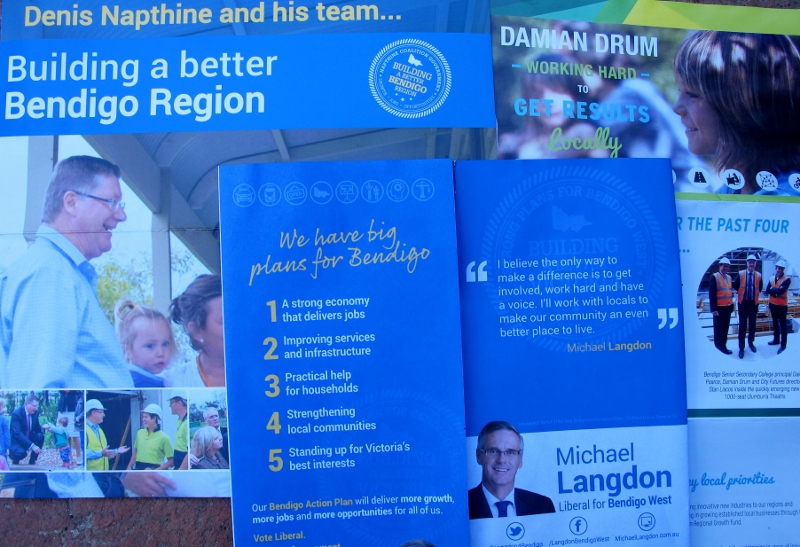 Brochures: if these are any indication, the Coalition isn’t very interested in the environment.

To be fair, you can’t judge a government by its brochures…for a comprehensive list of the Coalition’s claims on the environment, click here . The list has to be judged on its merits, though we can’t resist pointing out that it omits mention of private development, cattle grazing and prospecting in National Parks. It also seems to assume that abolition of the 20% renewable energy target, burning a record area of public land and making it easier to clear native vegetation are wins for the environment.  We are a long distance from the time of Bill Borthwick, Victoria’s first and probably greatest Conservation Minister, who served under Premiers Bolte, Hamer and Thompson, and founded the EPA and the Land Conservation Council.

For a detailed assessment of the Coalition’s enviro record by Environment Victoria, click here.

Next up: Labour and Greens brochures, if we get any.