‘There was never a body of men so foolishly, disastrously wrong,’ wrote Eric Rolls in his 1984 book, They all ran wild.

He was talking about the Acclimatisation Societies of Australia, people who believed that this continent was lacking in nice plants and animals, and decided to bring a few good ones in. Among their introductions were carp, rabbits, sparrows and starlings.

Local researcher Doug Ralph has unearthed the 1874 annual report of the Castlemaine branch of the society. It’s easy to be superior about their efforts from this distance, but their attitudes were shared by some pretty well informed people at the time: Victoria’s preeminent botanist, Ferdinand von Mueller, for example, is responsible for bringing blackberries into the state! 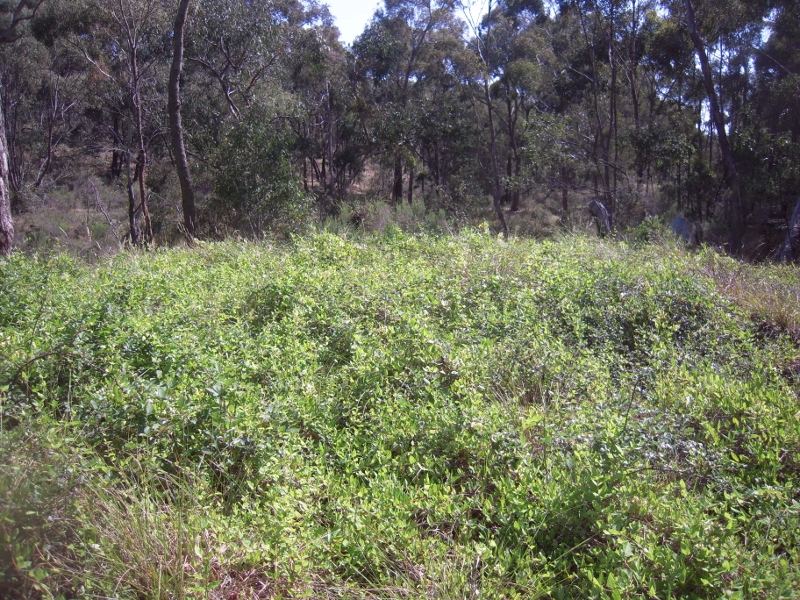 Assorted weeds near Chewton: the nineteenth century enthusiasm to ‘improve’ Australia has left us with an expensive legacy of feral plants and animals.

Part of the 1874 report is printed below. It’s worth noting that the society’s effort to bring carp to the district eventually failed. This pest didn’t appear in numbers in Victoria till the mid 20th century:

‘In our last report we stated that the efforts of the society had been more particularly directed to stocking the various reservoirs and watercourses with fish This work has been continued during the past year, and we have received from the Ballarat Fish Acclimatisation Society several consignments of English perch, which have been placed in the Muckleford Creek and elsewhere We cannot omit referring to the immense amount of food and enjoyment this fish has afforded to the inhabitants of Ballarat, when from Lake Wendouree (which was four years ago a dry plain) upwards of nine tons of fish were caught during the past season We have every reason to believe that our experiments may prove equally successful. The trout which we reported as having been placed in the Harcourt reservoir we have not yet heard of any being seen or caught. But, in case they have survived, we should have some evidence during the next few months. The Murray cod and other fish
placed in the Expedition Pass Reservoir we have information that they have been seen, and no doubt during the next season there will be plenty of fish for the anglers in this sheet of water. The carp also have multiplied wonderfully in the several private dams where they were placed, and no doubt they exist in large quantities in the various larger reservoirs where they have been placed.

‘A quantity of eels have been placed in one of our reservoirs, as it is well known that none of the rivers or creeks flowing into the Murray contain any of this fish, it is an experiment which is being anxiously watched. We have not this season incurred the expense of procuring any trout ova from the salmon commissioners of Tasmania, as the Victorian Acclimatisation Society has promised us a supply of fry as soon as they are ready for removal, and, when received, they will also be placed in the Harcourt Reservoir with the other trout. We have not been unmindful of our neighbours, as we have sent consignments of carp to our enterprising brothers of the angle at Ballarat. These fish, we are informed, are increasing very rapidly. In addition to the fish above-named, your committee have been endeavouring to breed pheasants, for the purpose of turning out in the more undisturbed portions of the district. We had a very valuable present of twenty-six Japanese green pheasants’ eggs from the Victorian Acclimatisation Society , but not withstanding the greatest care in attempting to hatch the egg, we only succeeded in bringing out five chicks, and these speedily died. During the past year we have, at considerable cost, obtained a number of hares, which have been turned loose in various parts of the district, and we have had satisfactory evidence of their having increased in numbers. This will afford plenty of employment to our coursing sportsmen.’