Is a historic place a relic?

The Victorian Environment Assessment Council is conducting an ‘Historic Places Investigation’, submissions for which are due to VEAC by September 12.

FOBIF is making a submission to this process, arguing that a historic place is not simply something old you can look at and have thoughts about the past. It’s a place in which you can see change happening, as the practices of the past are changed to suit new community needs. 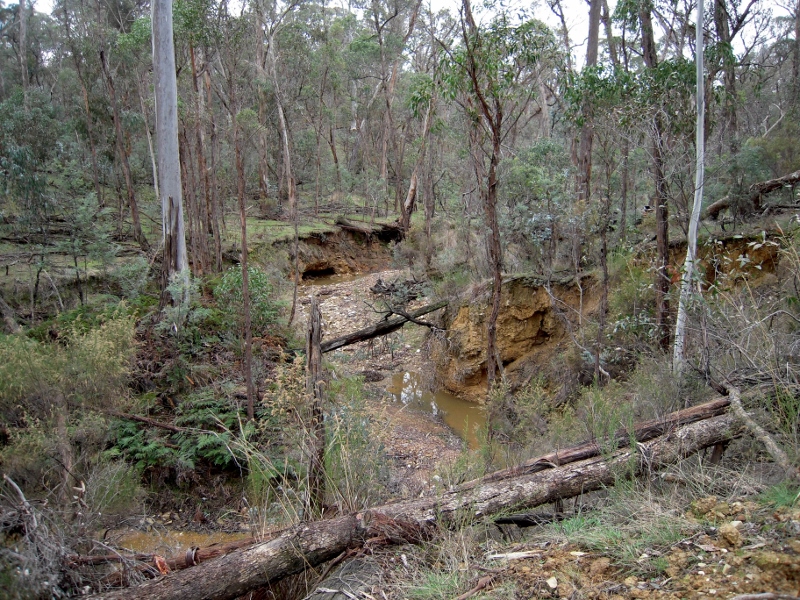 Sebastopol Creek, in the Castlemaine Diggings NHP: ruined waterways on the slow path to recovery are a dramatic historic reality.

Specifically, we are arguing that the Castlemaine Diggings National Heritage Park should be valued not simply for its evidence of gold workings, but more especially for the way it shows the spectacular environmental damage wrought in the past, and the way this damage is gradually being repaired over time.

“We wish to make a submission to this enquiry, focusing on the Castlemaine Diggings National Heritage Park as a Historic Landscape.

“The Diggings Park was given National Heritage status in 2005. The declaration statement  goes into great detail about evidence of mining practices in this landscape. This is fully justified. What is less understandable is that the statement completely overlooked what is perhaps the most striking single feature of this landscape: that is, the ruined waterways. The environmental devastation wrought by gold fever is mentioned blandly in one sentence: ‘The degree of alteration of, and intervention in, the natural landscape makes a strong impression on visitors.’

“We believe that the Diggings Park is an important historic place which should be valued, not simply as a collection of ruins, but as a dynamic sign of change. Our 2004 letter to the Department of Environment and Heritage is attached. It was largely ignored, and we’re hoping VEAC might have a more lively idea of what ‘historic’ means than DEH had then.

“The following submission to the 2004 process represents our idea of what the Park means as a ‘historic’ phenomenon. We believe that any status given to it as a ‘historic place’ should emphasise the qualities we highlight here:

“We believe that the unique experience provided by this park is the sense it gives of the devastation of the past and the gradual and inspiring recovery of the landscape. Visitors who see the very rare ancient trees, the rich understorey and the regrowth on mining sites can appreciate this remarkable phenomenon, not as a thing of the past, but as a reality now.

“The Heritage Action Plan for the NHP accurately states the case for the way the box ironbark forest should be seen:

“‘The current forest setting is not an interpretive problem, but rather an interpretive bonus for the Park. It highlights the transience of mining, demonstrates the severe environmental impact that can result from inadequate environmental constraint, and illustrates some of the resilience of Australia’s native vegetation.’

“We do not support a heritage listing which would imply a freezing of the landscape, with overriding value given to mining relics.

“The heritage value of the recovering forest, and all it implies about natural values and the heritage of Aboriginal management, should have at least equal emphasis in any listing.

“For us, the Park is representative of change, and that is what a heritage listing should emphasise. In our opinion the Park clearly qualifies for National Heritage listing under criteria a (outstanding importance in Australia’s natural or cultural history), c (potential to yield information about cultural or natural history) and d (it demonstrates the principal characteristics of a class of Australia’s natural and cultural environments). In particular it is unique as a living example of the conflict of our natural and cultural heritages.

“The Operational Guidelines for the Implementation of the World Heritage Convention (1999) note:

“‘Cultural landscapes are illustrative of the evolution of human society and settlement over time, under the influence of the physical constraints and/or opportunities presented by their natural environment and of successive social, economic and cultural forces, both internal and external.’

“All this suggests an emphasis on change, not preservation of relics. As Jane Lennon has put it:

“‘Interpretation of the gold rush era has tended to focus on the heydays of the 1850s yet the traces of that era that we see in the landscape to-day are not the same as the rapid environmental chaos that followed then—150 years later the landscape has mellowed and taken on a new cultural identity that awaits deciphering by the discerning tourist. How will this be done? How can the landscape speak for itself?’

“Lennon calls for ‘a new approach to the teaching of history’ and emphasises the importance of ‘continuity.’ We fully support this approach. In particular, we argue that emphasis on the value of the recovering forest, and the need to protect its recovery, should feature strongly in any heritage listing.”

2 Responses to Is a historic place a relic?