Floods can be complicated, but the fundamental cause isn’t: water falls from the sky in volumes too big to be confined within watercourses. These overflow onto flood plains. That’s it.

There can be additional factors, of course: if vegetation in the catchments has been stripped—say, by fire, or unwise clearing—then violent rain can cause massive washaways and erosion. And the disaster is compounded when people have built homes on the flood plain, something Australians have been prone to do for 200 years [see our Post].

This is what happened in the floods which devastated Castlemaine in 1889. Doug Ralph, presenter of the Tuesday history program on Main FM [94.9], has unearthed an interesting contemporary discussion of the event from the Argus newspaper [26/1/89]. The journalist, writing under the name Telemachus, is travelling in this region with George Perrin, Conservator of Forests in Victoria: 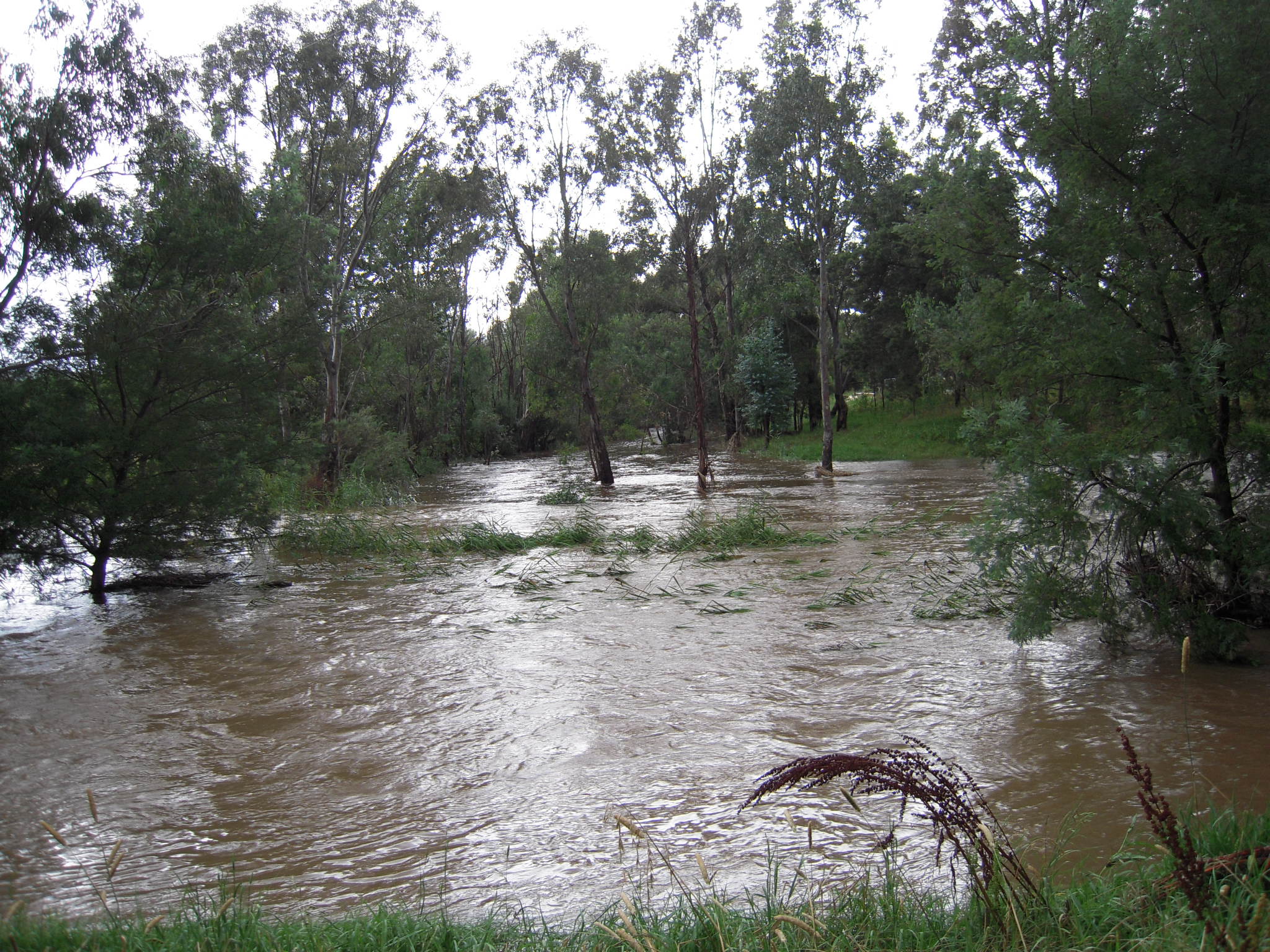 Forest Ck-Barkers Ck junction, January 2011: native vegetation along creeks does not increase flood levels. Discussion of the disastrous 1889 floods centred around three factors: the huge dumps of rain; stripping of hillsides of vegetation, which worsened runoff; and degradation of creeks in mining works.

‘”I could make a fine forest there.” Thus Mr. Perrin, as we ran along beyond Taradale towards Castlemaine, through the hills which the diggers tunnelled and honey-combed, and stripped, and left desolate and hideous, over so many Australian leagues…

‘…”Killing out the forest caused all that.” Thus, again, Mr Perrin, as we look down the long valley of Castlemaine, strewn with the wreckage of the late disastrous flood. “Silting up our creek caused all that,” said the townsfolk, sitting in sack cloth and ashes amongst the ruins, and probably the one statement was as near the truth as the other, and both a good way off. I believe still that flood was one of the few incidents which may fairly be described as an act of God. The powers of nature gathered those clouds together, and the

might of nature smote them asunder. Down they fell to earth, as the waters of the deluge fell, and rolled us mightily over all that barred their way. Did not an old colonist write us an account of just such another wall of water thundering down another gorge in the year ’42, and of his own wild ride to warn a shepherd below. And there had not been much forest clearing in ’42, Mr Perrin. We shall all agree with you better when you tell us how the clearing of the mountain head does certainly tend to dry up those most precious gifts of nature to Australia, the permanent mountain springs. And we all listen with interest to Mr. G. W Bruce (of Flinders lane and Carrawurrabool), who travels with us to Echuca, as he tells us how, by caring for the timber and encouraging the scrub growth upon the heights of his mountain estate, he has actually persuaded a spring whose source was coming farther and farther down the mountain glen to return to its old, cool, green, mossy cradle, and sing there continuously as in the days when no axe had been heard in Australian woods. So may it be, so mote it be, so must it be throughout the land. It is a most sacred public duty to guard those mountain springs. They are the true deities of the groves, which all wise men will revere, and some long ago, when barbarism was tinged by a sweet poesy, not unreasonably worshipped.’

From this distance, it’s plausible to say that all three of the explanations for the disaster fielded in the above passage have some truth: first, the rainfall was dramatic: 120 mls of rain fell in a few days at the start of January; second, the surrounding hills had been stripped of protective vegetation; and third, the waterways were degraded anyway, having been ruthlessly sluiced and dug over in the preceding decades, so the quantity of loose silt was massive.

One thing we can be sure of: that the floods weren’t caused by vegetation in the creeks. This explanation, which caused a brief call for our creeks to be stripped of vegetation and turned into urban gutters during recent floods, is a dud. It’s surprisingly widely believed, however.