Floods are probably the last thing on anyone’s mind as we endure another heat wave–but it’s a sure thing that they’ll happen again some day. The North Central Catchment Management Authority is looking for ways to soften the blow when it does come, and has run a public meeting and a number of consultations to gauge community feeling about how the three Castlemaine creeks [Barkers, Forest and Campbells] should be managed. 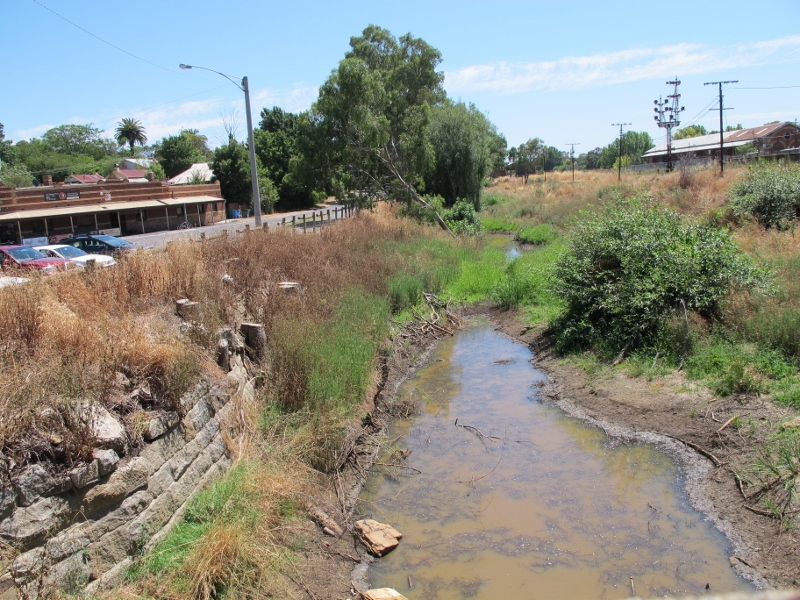 Barkers Creek, January 2014: Even when it’s justified, creek clearance can cause public angst. There’s no evidence that clearance of native vegetation does anything to reduce flood levels.

Here’s a list of ideas thrown up in discussion so far:

–Levees (particularly investigation of existing levees around the bowls club and National School Lane but also a suggestion to add a levee along the north side of Forest Creek alongside the caravan park from Barker St bridge to the railway;

–Improve local drainage (a large number of suggestions relate to this);

All of these ideas present challenges or problems in one way or another. For example:

–Creek clearance: a lot depends on what you mean by this. Occasional efforts have been made to argue that native vegetation significantly raises flood levels. There’s no evidence for this. As the 2012 Waterway Management Strategy puts it: ‘Research has demonstrated that vegetation plays an important role in slowing floodwaters and lowering flood peaks.’ The Strategy points out, however, that some vegetation, like willows, can raise flood beds and worsen flooding.

–Levees: these would need careful planning, or they simply solve the problem in one place by moving the floodwaters elsewhere. The railway line is effectively a levee which has pushed flood waters over towards Gingell Street, for exemple.

–Increase bridge capacities: presumably this means increasing the span of bridges to allow more water to pass beneath them. Flooding often happens when a wide stream has to pass under a narrow bridge. Given that there are several bridges in the town, widening could be expensive.

In other words, there are no cheap and easy solutions. And in the background of this discussion there is the amazing fact that 120 years after the disastrous 1890 floods we have no accurate idea of flood levels.

DEPI and the NCCMA have already proceeded to some vegetation management along Barkers and Campbells Creeks, and this has caused angst in parts of the community. The moral of this is that whatever solutions are adopted need to be carefully and clearly argued to the public.

We’d be interested in any ideas readers might have. Alternatively, you can write to the person in charge of the NCCMA consultations, Shaun Morgan: Shaun.Morgan@nccma.vic.gov.au