The Coliban gets a drink

Following expressions of concern by local residents at Taradale [and by FOBIF–see our April 18 post] about the state of the Coliban river, Coliban Water started a small release of four megalitres a day into the river last week. 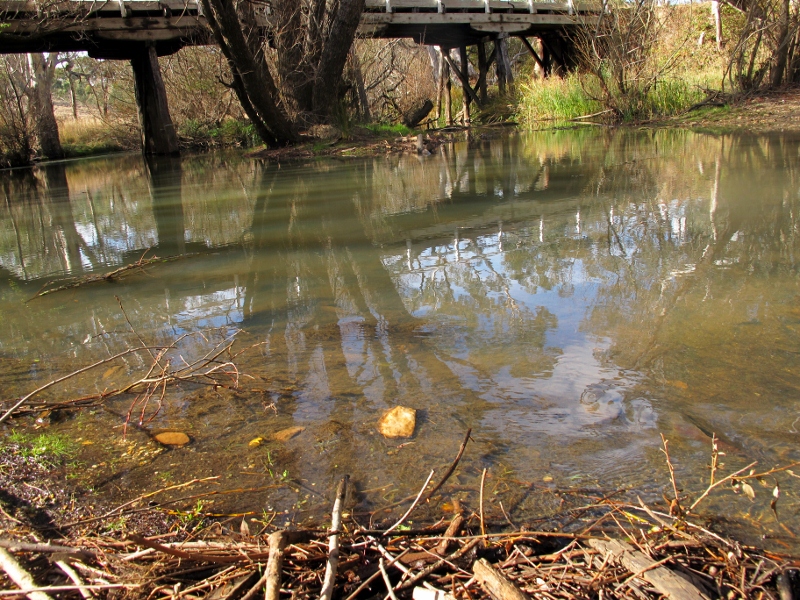 The Coliban at the Metcalfe road bridge, Taradale, May 7: Coliban Water started a small environmental release from Malmsbury reservoir into the river last week, and it makes a (small) difference.

Four megalitres isn’t much, but the river, sometimes called ‘the forgotten river’, definitely looks the better for it. Details on Coliban Water storages and flows from its reservoirs can be found on the authority’s website: http://www.coliban.com.au/water_security/reservoirs.asp

In spite of the frequent contention that environmental flows mean less water for people, common sense suggests that they’re as important for communities as they are for ‘the environment’. As the newly constituted Department of the Environment and Primary Industries puts it:

‘Scientists today understand that the way in which water flows in a river system is vital to maintaining its physical, chemical and biological health – and, therefore, the communities that rely on it.’

The same post in which this statement occurs also contains the following statement:

‘Victoria is expanding the water it sources from non rainfall-reliant supplies by pursuing innovative water sources such as desalination and recycling as well as stormwater and grey water use.’

For numerous reasons this is a very puzzling claim–but we’ll leave readers to work out how it fits with Victorian realities.