Another side of Kalimna 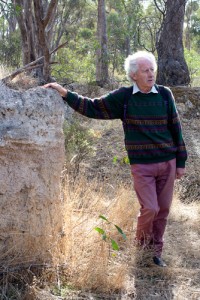 On a perfect Autumn day, geologist Julian Hollis recently led fourteen walkers on the second FOBIF walk of the year, through Kalimna Park. We were lucky to be accompanied by Julian, who is often seen walking in the area and has studied it for some years.

Kalimna is well known for its variety of native vegetation, and particularly its spring wildflowers. It is less well known for its 400 to 450 million years of geological history, but Julian’s explanations brought that history to life for the walkers.

On the way to Kalimna we stopped at the cutting on the north-east corner of the intersection of Campbell and Hargreaves Street. There, Julian explained that the cutting was created in the 1850s so that horses would not be faced with such steep inclines. Two interesting geological features of the cutting were the quartz reef and anticline shown in the photos below.

Heading towards the Tourist Road we stopped to take in the view to the south, where Mount Franklin and other peaks could easily be seen. 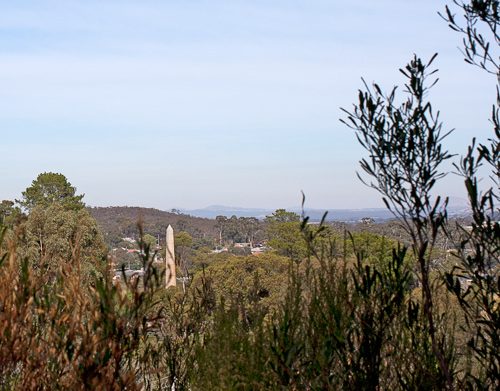 View over Castlemaine and beyond from Kalimna

In the couple of hours that followed we walked on tracks to the north-east of the Park and then back to the Mount Alexander Golf Course. Julian discussed the large anticline on the Tourist Road, as well as some intriguing tube-like holes in a rock face, and he pointed out evidence of early miners’ cottages. We now know that some of those miners were unlucky, because we saw a shaft in excess of 35 metres, in which no gold at all was found.

Anticline on the Tourist Road (left). Looking into the deep mine shaft (right).

Many will have driven over the Tourist Road but fewer would know that its original gravel surface came from quarries in Muckleford.

We also saw evidence of a little known geological ‘shear’, and Julian showed how rocks can be dated according to the impressions left by graptolites known to have lived at particular times.

Thanks to Julian for leading another informative and authoritative walk in our local area.

Dominique Lavie has sent us some extra photos which highlight the stunning colour and texture of the many rock formations we viewed. Her photos can be found here.